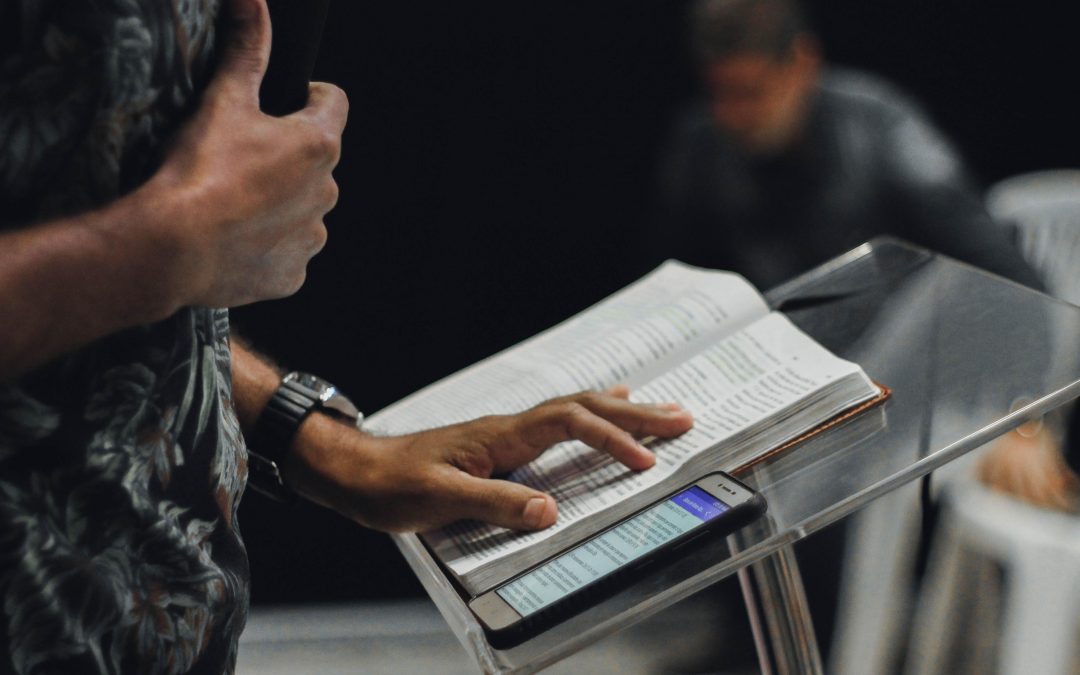 I taught a class called “Preaching through Ephesians” last semester at Houston Baptist University, and in the coming months, I’ll be adapting a few of my lectures into blogs. The first thing we talked about is applicable to any person who shares the word of God: a leader in a church, a Sunday school teacher or small group leader, or a counselor or mentor. I believe it is foundational for the life of any preacher or Bible teacher to recognize the connection between the messenger and the message.

The life and actions of a preacher profoundly impact – for good or ill – the way in which the message is received.

*Throughout this blog, I use masculine pronouns and refer to “the preacher” for the sake of simplicity. However, I encourage women to share the gospel and teach the Bible, according to their gifts, and I believe this blog applies to both men and women in all kinds of roles.

Life and Character of a Teacher

The word of God is intended to be communicated and understood, and part of that responsibility lies with the audience, but part of it also lies with the preacher or speaker. I can think of places when Paul, to a certain extent, mingles the message with the life and character of the preacher. The moral life and integrity of the preacher matter for the appreciation of the message. We all understand this. For example, if the senior preacher of a denomination or church runs off with somebody in the church, the people of the church are affected. At one level it doesn’t change anything he said in the last 20 years. The sermon is still the sermon. What you felt and heard and were convicted about is still valid. Having said that, his actions wound people. Going forward, it weakens the power of the message and of all those past messages. That’s understandable.

I was once part of a fellowship where one of the teachers, after being married over 50 years, attended a high school reunion where she reconnected with an old boyfriend. She went back home, started writing to the old boyfriend, and the next thing you know, after 6 months or so, she left her husband for the high school boyfriend. It shocked everyone. I don’t know the facts of what her marriage was like, and I’m not saying you can’t have marital problems. Anybody can. But I do know this—my children were part of that church, and it hurt them to see that well-known leader we all trusted do that. She hurt them. She wounded them, and I’m sure other young people felt the same. They were like, “Is this what church is?” The credibility of the message was harmed for them.

So, it’s hard to separate the message and the messenger. Look at 1 Timothy 4 and notice the connection between the moral, spiritual formation of the young man and the encouragement that Paul is giving Timothy regarding his preaching. So, Paul says in 1 Timothy 4:6,11:

6 In pointing out these things to the brethren, you will be a good servant of Christ Jesus, constantly nourished on the words of the faith and of the sound doctrine which you have been following.

11 Prescribe and teach these things.

So, Paul tells Timothy to teach sound doctrine, but then connects Timothy’s preaching to his behavior.

Preaching and the Moral Life Are Intertwined

12 Let no one look down on your youthfulness, but rather in speech, conduct, love, faith and purity, show yourself an example of those who believe.13Until I come, give attention to the public reading of Scripture, to exhortation and teaching.

Timothy should not be an example of youthful indiscretion, but he is to be mature in his behavior. Paul is talking to Timothy about his preaching, but notice how it is all wrapped up with his moral life. Verse 12 is an exhortation to live as a good example in conduct, faith, love, purity. He doesn’t want Timothy to neglect the spiritual gift that is in him. Paul says to take some pains with these things.

15 Take pains with these things; be absorbed in them, so that your progress will be evident to all.16 Pay close attention to yourself and to your teaching; persevere in these things, for as you do this you will ensure salvation both for yourself and for those who hear you.

“In them” in verse 15 has to do with both teaching and moral discipline. This verse refers to “your progress.” There’s a certain amount of practice you can exercise. You will get better morally and spiritually, and as a teacher or preacher. In these verses, the connection between the message and messenger is established. They’re not identical but the connection is there.

1 Thessalonians – Paul’s Concern for their Perseverance

1 Thessalonians 2 is another passage where Paul links the behavior of the messenger with the message. The historical background is that Paul had worried about the perseverance of the Thessalonians. He’d only been with them a short time because opponents of Paul and his message ran him out of the city. He went to Berea, and then from there the same Thessalonian Jews came down and ran him out of Berea. He then took a ship down to Athens, and he sent Silas and Timothy back to Thessalonica to find out if the Thessalonians had persevered. Paul has an interesting turn of phrase here. He says, “I know you heard our words, but I was concerned that you heard the word of God.” It’s an interesting sort of conflation of the words of men and words of God. But Timothy comes back and brings him word that the Thessalonians still love Paul and have held on to the gospel (1 Thessalonians 3:6-8).

Paul was concerned about their perseverance. It’s understandable because there was fierce opposition to Paul’s preaching, and, therefore, it was expected that those who had believed his message would also experience opposition and persecution. But notice this in 1 Thessalonians 2:3:

3 For our exhortation does not come from error or impurity or by way of deceit;

Paul says their exhortation doesn’t have bad motives. They’re not trying to advance their own lust or deceit (maybe make money out of it).

4 but just as we have been approved by God to be entrusted with the gospel, so we speak, not as pleasing men, but God who examines our hearts. 5 For we never came with flattering speech, as you know, nor with a pretext for greed—God is witness— 6 nor did we seek glory from men, either from you or from others, even though as apostles of Christ we might have asserted our authority. 7 But we proved to be gentle among you, as a nursing mother tenderly cares for her own children. 8 Having so fond an affection for you, we were well-pleased to impart to you not only the gospel of God but also our own lives, because you had become very dear to us…

10 You are witnesses, and so is God, how devoutly and uprightly and blamelessly we behaved toward you believers;

Paul is appealing to his and his companions’ behavior because their integrity lent credibility to the gospel.

11 just as you know how we were exhorting and encouraging and imploring each one of you as a father would his own children, 12 so that you would walk in a manner worthy of the God who calls you into His own kingdom and glory.13 For this reason we also constantly thank God that when you received the word of God which you heard from us, you accepted it not as the word of men, but for what it really is, the word of God, which also performs its work in you who believe.

Paul has connected the credibility of their lives with the message that he preached. And he reminds the Thessalonians of his integrity in preaching, that it has something to do with how God was able to work among them, in that it was not just human words. It’s a very interesting text. The effect in their lives is one of the things that Paul sees as a movement of the Spirit. That’s the work of God.

We’ve looked at two texts where Paul connects the message and the messenger. I think we can all agree the message and the messenger in a perfect case belong together. You want integrity of the speaker and the authenticity of the message, and then God uses the integrity of the speaker. Having said that, they are not the same. The gospel is God’s word and God’s message to salvation that can actually stand apart from the authority of the human messenger. It’s an important distinction that I’ll discuss in next week’s post.

← Our Journey to Christmas Whose Gospel Is It? The Power of the Message →