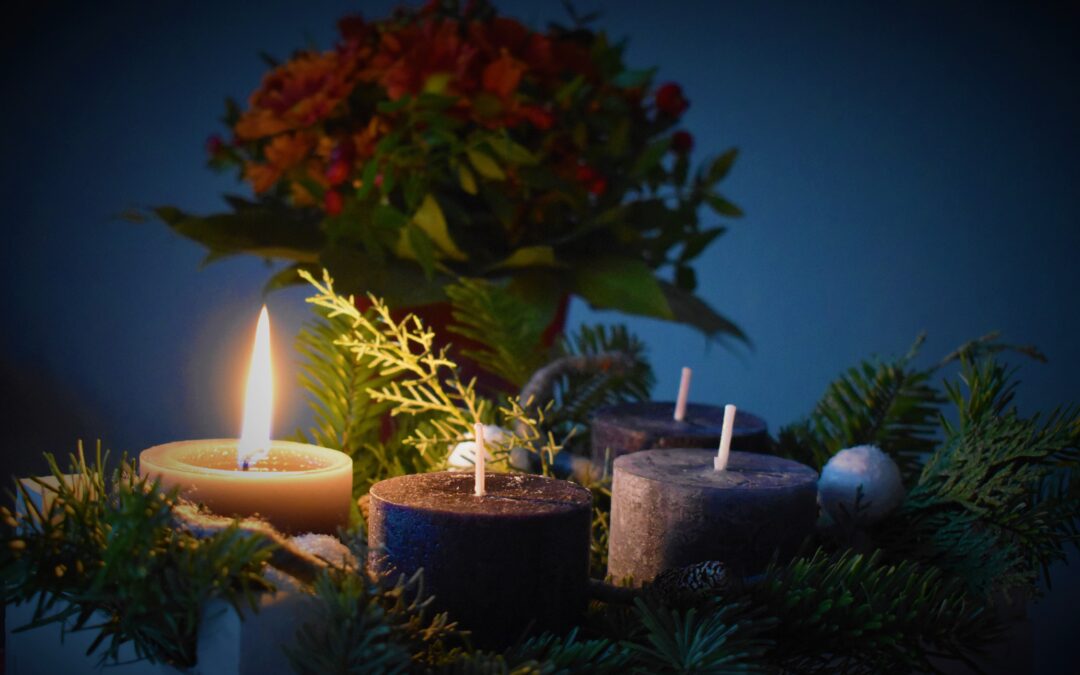 Christmas is a glorious season, full of lights, music, meeting up with family and friends, parties and receptions, shopping, special candles, wreaths, foods, and decorations, the excitement of children opening presents, special worship services, special traditions, and all the joys of the season.

It is surely the happiest time of the year—except when it’s not. It is well known to all of us—especially the older we get—that all of these glorious moments are also filled with the pain of missing those whom we love; maybe because the children and grandchildren don’t come around as much as they used to, or so many of our loved ones have already gone to be with the Lord, and we miss them. This season of the year is for many people filled with memories of a joyful past that no longer matches our present. Declining health, loneliness, regrets, fears, and the loss of good things that money can’t buy crowd our hearts and fill our troubled minds.

We should never deny that. It reminds us of where we are in God’s timeline and sets the stage for things to come. We have to face these realities head on if we’re ever to appreciate and continue to work through that pain for the deepest joys of Advent. The Christmas season we now celebrate is Advent, but when we call it Advent we must remember that there is a first Advent and a second Advent.

The word advent means presence, coming, arrival, and the first advent, Christmas, points especially to the birth of our Savior, the incarnation of God in Jesus Christ. As we look back on it from our point in history, it’s filled especially with joy: the realization that God has begun his work of restoration. But prior to that first Advent, God’s people had to face up to the brokenness of their world.

When we step back in time prior to the first Advent, the key feeling is anticipation. The Jews of Old Testament Scripture were filled with what C.S. Lewis would call longing. It’s that sense of anticipation, filled with the hope—a kind of painful hope—that something good is still in front of us. The Old Testament is an unfinished story waiting for its days of fulfillment. It is a story of longing, of promises, of hopes, sometimes partly fulfilled, but never completely fulfilled.

And even with the birth of Messiah, which we rightly celebrate, brokenness is what we still see all around us. Paul says even those who did not sin in the likeness of Adam’s sin nonetheless experience this deep presence and pattern of brokenness. All of us fall short of the glory of God, but it is not just our own specific, moral rebellions, our volitional sins, that constitute our pain, it’s the ongoing brokenness that is within us and all around us. The pervasive fallenness, the corruption that we experience as reflective of our frailties, our weakness, and our mortality.

And today, though people may disagree as to how or even if this brokenness will ever be cured, we all know it’s there within us and all around us. The whole world knows it’s so. Every utopian ideology, every activist protest—no matter how misguided—has somewhere underneath it the belief that things ought to be better. That belief is present, even when we are so broken that we have to resort to cruelty and violence in order to achieve it.

But we all know it’s not supposed to be this way. And the sermons of the Prophets and the laments of the Psalms remind us that one day the creator God of all of history will unfold the final chapter of his plan of rescue. He started that plan with Abraham and furthered it with Isaac, Jacob, and Israel. And then, though Israel failed, he pressed that plan forward, promising, even after Israel would be nearly annihilated and sent into exile, enslaved and tormented by despotic rulers, that one day he would send a king, and the world would flourish.

And that’s what Isaiah called Good News. That’s what the angel said to the shepherds, “I bring you good news of great joy, which will be for all the people. For unto you is born this day in the city of David, a savior who is Christ the Lord.”  And all flesh shall see the glory of God. Had not Isaiah promised it? That one day there would be a king, a wonderful counselor who would be called mighty God, everlasting Father, prince of peace, and of the increase of his government there would be no end?

But the story of Jesus, the birth of the great king at the first Advent didn’t unfold the way it was traditionally expected. From the very beginning, the story took an unusual turn. The child announced as king was not born in a castle and wrapped in soft clothes and blankets, but laid swaddled in a feed trough. And the ruling provincial power of the day tried to kill him, and though Herod failed, he ended up slaughtering untold numbers of innocent babies in the process. Because of the birth of Jesus, the dark powers of this world were stirred into action. Alongside God’s storyline to bring salvation, there was a subversive plot animated by the serpent of old using human violence, greed, and lust for power, and these malevolent powers succeeded in putting him to death. But underneath that corrupt plot lay a deeper story, another plot line that ran all the way from the Garden through Abraham and Israel to the Messiah himself, and even then to a more surprising, indeed shocking turn of events when God’s mysterious plan led through a Roman cross to Messiah’s resurrection, to an immortal body that can never die again.

Today we are between the two Advents: between his birth and his now enthroned status. The first advent did not stop all of humanity’s problems; all is not yet cured. Though he is raised and enthroned, he is not yet universally acknowledged as king, and his people still live in a broken world, and suffer rejection just as he did. There’s a second Advent before us. And now we are in a spot reminiscent of the painful longings of the Old Testament saints, though farther along the storyline to be sure. We are in the position now of knowing that the beginning of the end has started. The Messiah has come, and we celebrate that with joy, but God’s final victory has not yet arrived. We are still filled with a longing for things to be set right.

Then when he comes, all the world will bow the knee to him: prophets, priests, prime ministers, presidents, popes, ayatollahs, tyrants, wicked masters, bureaucrats, and busybodies. Everyone and everything in Heaven and earth and under the earth will acknowledge that Jesus Christ is God the king.

Therefore, even though the first advent carried Jesus and his followers through many tribulations—and still does!—don’t give up hope. The way of peace is yet before us, the plot line has come to a great moment of fulfillment, the birth, death, resurrection, and ascension of Jesus, but there is still much more to come.

I assure you—by the word of God and the words of the risen Lord that reinforce the whole story of Scripture—that one day, perhaps soon, God will summon us to a great banquet of salvation. All of us are invited. And we will sit around the table with Abraham, Isaac, and Jacob, and we will feast with Jesus in his Father’s kingdom, and he will then, as he promised at the Last Supper, once again drink the cup with us. And our mourning and our crying and our pain will be over.

Even so, come quickly, Lord Jesus.

Dr. Robert B. Sloan is president of Houston Christian University in Houston, Texas.