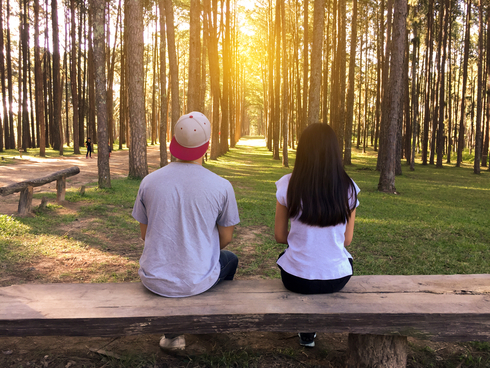 Young people carry a lot of fear and anxiety when it comes to dating – how do I ask a girl out? What if she says “no”? What if I never get asked out on a date? Will long-distance kill the relationship? The list of fears can be endless and dangerous. That’s why Sue and I answered a few student questions about dating several years ago. As Valentine’s Day approaches, I think it’s a good time to circle back to those questions. Below, I have provided an adapted transcript of the interview.

How do you start dating if you’ve never dated?

Dr. Robert Sloan: Let me say to the guys, something has happened over the last decade or two. What’s wrong with you guys? That’s putting it maybe a little too harshly, but not really. Listen, girls usually want to be asked for a date. And even though you may be too shy or insecure to ask a girl on a date, practice. Practice in front of the mirror. Do something.

Here is a backup position, send the girl to this interview and say, “You know what Dr. Sloan said in that interview. Yeah – what he said!” Make it easy on yourself. But really, asking a girl out is not that hard.

Mrs. Sue Sloan: It’s a lot easier for a guy than a girl because a girl shouldn’t pursue a guy. I guess you could ask him for coffee–

Mrs. Sloan: FLIRT! Flirt! Flirt! Girls, this is where you flirt. And by flirting I don’t mean anything improper. I mean smiling and giving an extra glance and being willing to talk.

Dr. Sloan: Girls want to be asked out. It is a compliment. It works.

As I look back on this interview, my answer stands. Guys, be men. If you like a girl, ask her out on a date. Buy her a cup of coffee or dinner. Make her feel special. Respect her. It’s not that hard.

What advice do you have for long-distance relationships?

Dr. Sloan: We had one time when we were separated for about 50 days. That’s probably the longest we’ve been apart. We’re not apart that much.

But nowadays, with technology, you can text and call and Facetime, but it’s absolutely critical that you don’t take your relationship for granted. And this happens with close friends and family members, brothers and sisters, and so on. Notice how easy it is to just be quiet or walk by somebody and be rude and not even intend it. It’s because in a certain sense we take for granted that we love this other person and this other person loves us. But you can’t do that.

The little things Sue and I do include saying “goodbye” when you leave the house and saying “hello” when you come into the house.

Mrs. Sloan: I love those kisses.

Dr. Sloan: You really do have to spend time together. There’s no substitute for that. But the question was about long-distance. There are people who are apart sometimes because of work. They might be apart for months at a time. That’s where the promise to be faithful comes in. You have to be faithful.

Mrs. Sloan: One of our daughters found her husband online through ChristianMingle.com. She lived in Texas, and he lived in South Dakota when they first met. They had that experience where he came to Texas one month, and she flew there the next month. They did that every other month where one of them would travel, but they talked and emailed.

Long distance relationships are happening more than I think they used to because it is doable. It’s not the same, but it is doable. Many of the HBU faculty and staff members had to do long distance with their spouses for a time. For some of them, spouses lived in another city or state for a while. With Internet, phones, and texts, you can still be close, but you have to work at it.

I asked a younger friend who dated her husband long-distance for a year and a half before he proposed. She provided some practical answers:

This interview was adapted from a talk President and Mrs. Sloan gave to the students of Houston Baptist University in 2013. You can watch the video of that talk here.