Hope in the Midst of Darkness 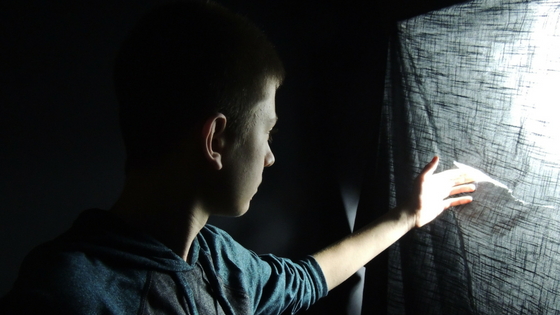 I have a prediction for young people today, for high school and college students, graduates and young professionals. It’s not much of a prediction. You don’t need a government grant to demonstrate it. Dark days are coming. But that’s an easy prediction because life is coming at you. You’ve experienced, of course, your own series of trials, tribulations and difficulties. We’ve experienced them very recently in and around Houston.

As the scriptures say, there are times for mourning and times for dancing. Perhaps today is a celebration for you. You finished finals or graduated. You started your first job or took a major step in a relationship. Maybe you got a promotion. Life is full of situations for which we can be thankful and happy. But life is also hard because we live in a broken world.

So as I charge you to be hope in the midst of a dark world, you should know that darkness and hope are not opposites. Darkness is very often the context in which hope can be seen.

I’ll tell you the story of a very famous man. He sat in a very small room in a famous capital city – blind. His blindness had recently come upon him, and from that moment his agenda dramatically changed. His friends led him by the hand to the house where he had anticipated going, and he was welcomed by the political connection he had, a man by the name of Jude. But because this famous man was blinded on his journey, the circumstances had changed dramatically.

He had expected a lavish welcoming meal and scintillating conversation about politics and theology all mixed up into one. He had expected to be able to tell and learn some of the latest bits of gossip going on in his political, theological, and religious sphere of reference. But that conversation hadn’t happened. To be sure Jude had offered him some food, but this man really didn’t want to eat. He didn’t hear the conversation he had expected, but he did hear whispering. People were asking, “What happened?” And the friends who had led him there gave some descriptions, but he knew what had happened. He didn’t care to hear it recounted. So they put him in a room. The room could have been lavish, but what did it matter? He couldn’t see. But he wasn’t despairing. In a darkness that he had never felt before in all of his life, he had hope.

Because in the moment in which he was blinded, when a light shone down from heaven and struck him blind, he had seen something. There was this amazing confluence and juxtaposition of darkness, blindness, and light all at the same time. He saw something. Or better said, he saw someone. And the someone spoke to him and called him by name:

“Saul, Saul, why are you persecuting me?”

“I am Jesus, whom you are persecuting.”

And in the darkness of that room in Damascus of Syria, he brooded and pondered, but not hopelessly. He had never experienced such darkness in all of his life, but now he knew something that was shocking to him. The political and religious gossip that he had wanted to talk about had to do with the long awaited hope of his nation, how one day they could liberate themselves from the Romans and have God himself come in their midst, and Messiah the King would be brought forth. That glorious day in one sense had begun to happen, and it happened to him on the road to Damascus.

He had seen the Messiah, and the Messiah was none other than that strange teacher – warlock perhaps – the miracle-working Jesus who had been crucified. But now beyond any and all doubt, Saul had seen him, and what the earliest Christians had said about this Jesus was true. He was alive. He was the Messiah. The everlasting Son of God had appeared to him, and in that deep darkness, in blindness, in what should have been a moment of despair, he had an overwhelming hope.

By the third day of doing the only thing he knew to do, which was pray, he had another vision. He could see a man coming down the street called Straight. The man’s name was Ananias. Saul could see that Ananias was on his way, and he knew Ananias was going to put his hands on him and pray for him. Fish scales were going to fall from his eyes, and he would see again. It happened just like that.

This once blind man, Saul, who also had a Roman name, Paul, became the greatest exponent, pastor, missionary, and theologian of all the earliest centuries of the Christian church. His letters were so precious, insightful, and dramatically interpretive of all that had been changed and transformed that they were preserved, read, and used in worship. Soon they were regarded as scripture on a par with the books of Moses, Psalms of David, and the histories of Joshua and the former and latter prophets.

In a world of darkness, Paul had a hope that allowed him to say in Romans 3, “But now.” It’s the greatest conjunction in all the New Testament. The world is full of darkness and judgment, full of cursing and violence and greed. There is no one righteous, no one just, no one honest, no not a single person. The poison of asps is under their tongues. Everyone is seeking his own way. Everyone is under this ultimate judgment. Yet Paul was able to say, “But now.” In spite of the violence, greed, and evil in the world, God’s covenant mercies have been revealed through the faithfulness of Jesus the Messiah.

Be a Person of Hope

Be a person of hope in the midst of a dark and evil world because God has dramatically acted through the person of Jesus Christ, and the world will never be the same again.

Be a person of hope like Paul was when he wrote 1 Thessalonians 4:13 and following. He faced up to the death of Christian friends who had unexpectedly died, and yet Paul affirmed that even the darkness of death was not sufficient to conquer the death-defeating resurrection of Jesus. He said,

“But we do not want you to be uninformed, brethren, about those who are asleep, so that you will not grieve as do the rest who have no hope. For if we believe that Jesus died and rose again, even so God will bring with Him those who have fallen asleep in Jesus.” (NASB)

Finally, be like the person of hope Paul described in the middle of Romans 8 when he said the whole world is groaning and tossing. It’s under a curse. But even that curse is within the hands of God. God himself subjected the entire creation to this curse in hope that the creation would be set free from its slavery to corruption into the freedom of the glory of the children of God.

Paul says it hasn’t fully happened yet, but it will happen. God’s triumph and the creation of the new heaven and the new earth when the glory of God will cover the earth like the waters cover the sea is going to happen. Paul says,

“For in hope we have been saved, but hope that is seen is not hope; for who hopes for what he already sees? But if we hope for what we do not see, with perseverance we wait eagerly for it.” (Romans 8:24-25)

Have the sort of hope that enables you to persevere, to endure when the seas are tossing the world to and fro.

With all that you’ve learned, with all of your gifts, with all that God has placed before you through Jesus Christ, I charge you – be a person of hope because God has triumphed and nothing can separate us from the love of God which is in Christ Jesus our Lord.

This blog was adapted by Joannah Buffington from Dr. Robert B. Sloan’s charge to the May 2018 graduates of Houston Baptist University. You can watch the full charge below.