Engineering and the Christian Worldview 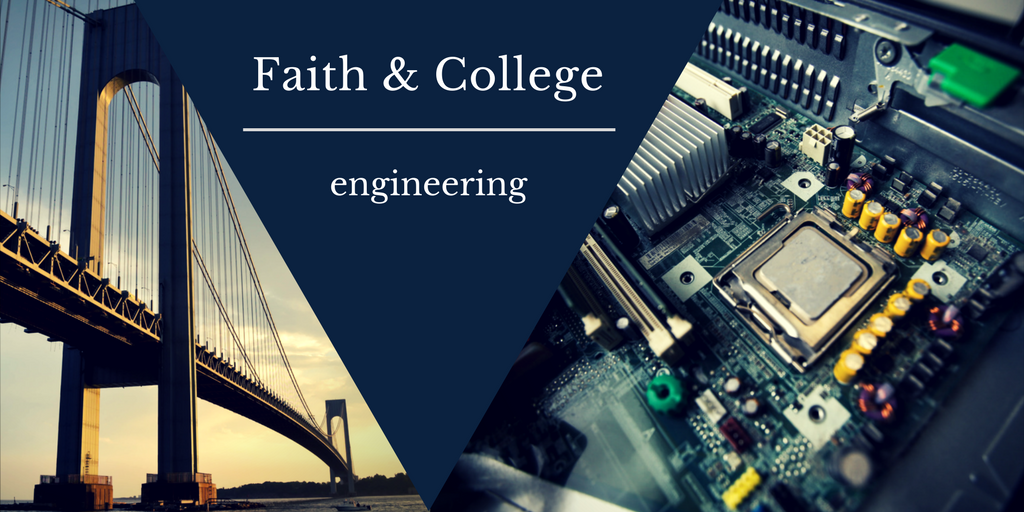 You’ve probably heard that engineers make the highest salaries, on average, of all college graduates. But is that their purpose? Are students who go into engineering and other highly technical undergraduate degrees only there for the expected large paychecks? Some students might think so, but engineers, like all humans, have a calling and purpose from God. It’s very interesting that the description we see of the human vocation in Genesis is a description that has highly specialized applications to engineers.

Engineering is the practice of taking ideas, conceptions, and information and translating them into some kind of ordered reality. You can have a design or idea, and an engineer, who is in many ways a problem-solver, takes the sources of information available to him or her through all the fields of learning – the sciences, the mathematics, the hard sciences, the social sciences, the humane arts, etc. – and translates all of that information through a process of creating order.

So engineers end up building things, physical things but also things that can be very abstract. They build bridges, road, and dams. They build computers, computer systems, and software. They build monuments, towers, and homes. They help build society. Engineers take all that can be known, confront a problem, and then try to bring an order to it. They bring organization and functionality. It’s beautiful and artistic, and at the same time, it works. It contributes toward the flourishing of life in the world. That’s what engineers do, and from the text of scripture, that’s what we’re called as human beings to do.

Our human responsibility to bring order

On Day 6 of creation, God makes the man and the woman in his image, and he gives them a mission and responsibility. He tells them they are supposed to be fruitful and multiply, and subdue the earth, which doesn’t mean to lord over the earth in an improper way, but it means to be the leaders over God’s creation. God has created, and now he puts these stewards—we could also say leaders, foremen, or superintendents – in charge, the man and the woman, made in the image of God. Every time the image of God is mentioned, it is accompanied by the human responsibility to bring order into God’s creation.

Humans are more than caretakers.

The human role is not just a caretaking function. Sometimes people think, “Well, Adam and Eve were just gardeners” or, “They just sort of kept the animal life,” as if they were only caretakers of what God had already done. They were caretakers, but actually they had a further responsibility. They were told to subdue the earth, to fill the world and multiply. They were to extend the work of God’s creation.

Order and Worship: Kings and Priests

That’s why the scriptures in some places refer to human beings in the mixed metaphor of “priest-kings.” Kings in the sense that humans are leaders over the created order. They bring order to it and subdue it. Again that subjugation, having dominion over it, is the process of adding to its order, its truth, its beauty. And yet as priests – the other aspect of what human beings do – they gather up the praise and worship that is due God, with whom they have fellowship in the garden, and bring the praise back to him.

So humans bring both order and worship. Like kings or leaders, they create organization and structure; like priests, they offer God the praise and worship he is due. That is the human vocation.

We are all called to be people who create and build to extend the frontiers of the kingdom of God through all of the abilities we may have. Artists, writers, and musicians do this. Physicists do this. Scientists do this. Medical practitioners do this. Business leaders do this when they build a business. Engineers do it when they build a road or a system, or build any kind of monument or structure. Humans bring order into God’s creation, and do so as an act of worship and devotion to God who is Lord over all.

Engineers should be agents of life.

Engineers are called to bring order to God’s creation. That’s what all of us are called to do. Engineers must be loyal and faithful to the task they have been given. They enable human lives, human families, human homes, human communities, and human nations to flourish. There is so much chaos in our world today, and associated with chaos is destruction and violence and the fragmentation of life and the abuse of power, but humans are created to be God’s priests and kings. In this dimension, we are made in his image to bring order to his creation, to bring beauty and goodness to it.

And we are called to live out our purpose with excellence – “God saw all that he had made, and it was very good.” It wasn’t very mediocre. It was very good.

One of the keywords of the creation is “life.” That’s what we mean when we say helping communities and people to flourish—help them have life. Help people and communities have the kind of beauty and order and goodness that God intended. Engineers must remember what they are called to do, to be agents of life, agents of goodness, agents of flourishing order, agents of building and extending the kingship of God.

Engineers are called to worship.

Finally, engineers and all of us must be loyal to why we do what we do. The why brings back that word “priest” or “priesthood” again. We do what we do as an act of devotion and worship. Adam and Eve were in the garden with God himself, and before they were cast out of the garden, they had this immediate access to his presence. So every breath they took was an act of worship. This was what they were supposed to do and what we’re supposed to do.

As kings we extend the monarchy of God throughout all the earth. As priests, we gather up the praises and worship him.

I charge engineers, and all of us, never to forget that in all of the study, in all of the work, in all of the hardship, we offer God the worship, devotion, and service that he alone is due through Jesus Christ our Lord.

The HBU College of Engineering was approved by the Board of Trustees in September 2017. The college will have three specialties: computer science, electrical engineering, and cyber engineering.

Under the leadership of founding dean Dr. Stan Napper, the first cohort of engineering students will enter HBU in the fall of 2018. You can follow the College of Science and Engineering on Twitter and learn more about the programs at HBU.edu/Science-and-Engineering/degree programs.

This blog was adapted from Dr. Sloan’s charge at the commissioning of the HBU College of Engineering on January 31, 2018. You can watch the original charge below.