Faith & College: The Purpose of Art 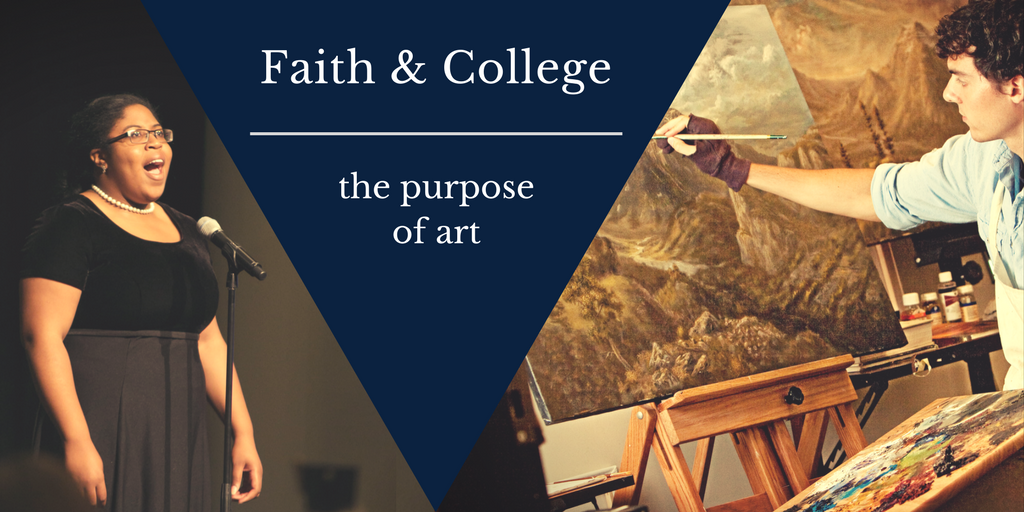 Our series of blogs regarding a Christian university has touched on the various colleges and schools of HBU and how each of them fits within the larger Christian worldview that we affirm in our mission and vision statements, and indeed in the Preamble to the letters of incorporation for Houston Baptist University.

Art from the Beginning

To think about our School of Fine Arts, there’s no better place to begin than the biblical story of creation. The God of the Bible – in the first activity we know anything about – initiates our understanding of him by the act of creation. He is the founding artist of the universe, and he himself declared, when all was made, that it was “very good” (Genesis 1). Of course, when human artists create, they create from something; but, in the case of the one true creator God, he began with nothing when he spoke the worlds into being.

Human beings are made in the image of God, which means we participate in his creative activity— especially so since, as his image bearers, we are called to have a ruling stewardship over his creation. We have responsibilities for all God has made, the earth and all it contains.

In this stewardship of ruling, working, cultivating, and protecting God’s basic works of creation, we extend his sovereign kingship into all the earth and, further, we direct the world’s worship back to him.

Story of the Bible

As we’ve seen in other blogs, the basic story of the Bible includes the creation, the Fall, and God’s plan of rescue. The rescue begins with Abraham and extends all the way through the story of Israel, reaching its climax in Jesus, the son of Abraham who does what Adam and Eve didn’t do — that is, fulfill their mission as assigned by God (Romans 5:12-21).

The faithful obedience of Jesus reversed the failure of Adam and reaches its own climactic moment in the resurrection from the dead, which will ultimately bring the repairing of the created order and the lifting of the curse that still lies upon it (see Romans 8:18-23; Philippians 3:20-21; Revelation 21).

So the goal of the story of the Bible is not just the reestablishing of the human relationship with God through Jesus – though that is a critical turning point – but is, in the end, the restoration of the entire created order. Human beings are made not only for a relationship with God, but also to do his work in the world, just as Adam and Eve were assigned to do.

What is ‘great’ art?

Our School of Fine Arts, through the creation of great music, beautiful paintings, sculpture, writing, and film and cinema, points directly to the creative/artistic work of God in establishing the world. These acts of artistry involve the discovery and assimilation of the materials of the universe in ways that stir the heart, challenge the mind, renew our perceptions, and thus direct us beyond ourselves, and even into realms behind the creation, which point to God himself.

Great art, just as any beautiful landscape or any act of human love and goodness, moves us to act in ways of greater faithfulness and service. The Greeks often pointed to art as that which could bridge the gap between knowing what is right and doing it. They believed art stirs us emotionally so that we are moved to do what is good and right. Great art today still accomplishes that.

Worship and the Will of God

Our School of Fine Arts (which has some of the most outstanding Christian artists performing and exhibiting in the world), operating within a Christian worldview, has a renewing and transformative effect upon the heart and mind in ways that become a vehicle for God’s Spirit to enable us to bridge the gap between knowing and doing what is right.

Great art, when inspired in its creation and in its reception by the Holy Spirit, makes us not only observers, but also doers of the will of God – that is, in our actions as world builders and sustainers, we become faithful worshipers of the one true and living God.

We teach and create art at HBU because great art reminds and inspires us to accomplish the calling we all have – to do God’s work in the world and give him the worship that he alone is due.

Related Blogs about Beauty and the Christian worldview:

The School of Fine Arts hosts concerts and events year-round featuring Schola Cantorum, University Singers, the Symphonic Band, student recitals and exhibits, a writers’ conference, organ recitals, a film festival, and much more. Keep up with everything happening at HBU here.

Students and faculty from the three departments within the School of Fine Arts represent the University with excellence. Below I have listed a few examples from the 2016-2017 academic year.

In the past year, two Cinema and New Media Arts students won a Gold Remi Award at the 2017 WorldFest Houston International Film Festival for their documentary, More Than Home; professor Joshua Sikora was featured in a documentary about the Star Wars prequel trilogy; we hosted our second annual HBU Student Film Festival, featuring 19 short films; and a short film by HBU faculty won the 2016 Audience Award in the 48 Hour Film Project. You can learn more about the Cinema and New Media Arts department at cinema.hbu.edu.

This year, Army veteran and HBU senior Jeremiah France completed “Flag of the Fallen” – watch the video highlighting the flag here. You can see some of our students’ amazing work on the Art at HBU Facebook page.

One of my life passions has been writing fiction, and I’ve recently published the first books in a young adult fantasy series about an orphan named Hamelin Stoop. The books are available at HamelinStoop.com and Amazon.