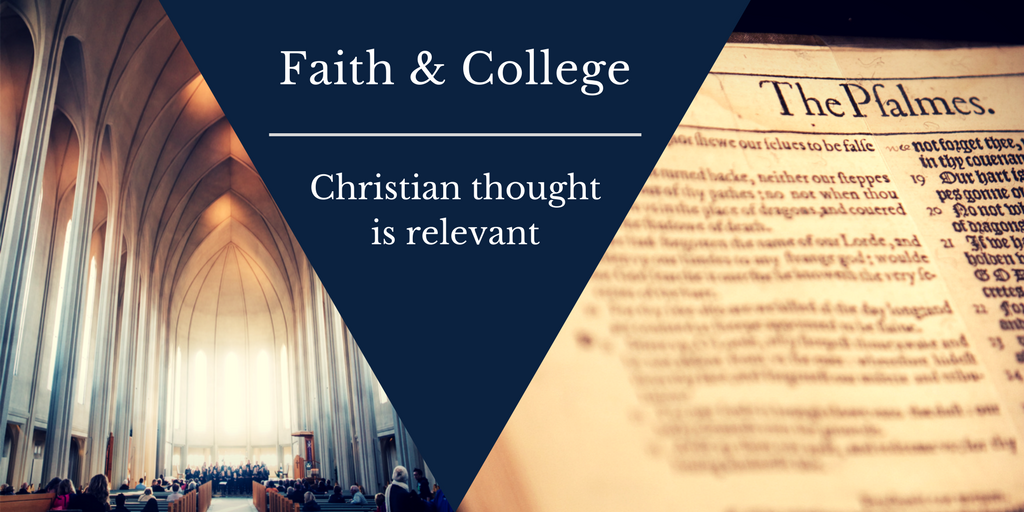 In this Faith & College blog series, I have been exploring the various colleges and schools of Houston Baptist University and thinking about how each of them reflects a Christian worldview. In some ways this task should be easy with regard to the School of Christian Thought. But, the study of theology and Scripture has become highly controversial among even historically Christian universities. In some places these schools and departments are so compartmentalized that they have lost their relevance for thinking broadly about the role of the Christian faith in the life of the Christian university. In fact, sad to say, in some places the academic study of theology has promoted a false kind of objectifying of the Christian faith so that some theologians deliberately separate their academic studies from their faith commitments. And, even more disheartening, some theologians now openly oppose the faith that originally nourished their academic and spiritual interests.

I’m thankful that at HBU the study of theology, Scripture, and the related disciplines remains firmly grounded within our central confession of the Lordship of Jesus Christ. It is vitally important that Christian theologians and philosophers (like those we have at HBU) become part of the vanguard of renewal for Christian thinking and living. I’m speaking not just with respect to HBU, but for the spiritual revival of thought and life needed across the world.

I don’t want to claim too much for our School of Christian Thought, but on the other hand, I don’t want to take it for granted. The school is significant not only as one of the schools of the University, but is important to all of us around the University because it helps us think clearly about those things we confess as followers of Christ.

I think the simplest way to say it is, in many ways, the SCT reminds us of the holistic content of the Christian faith. It recalls for us what we should be paying attention to with respect to the core convictions that drive and shape all that we believe and how we live.

But of course, the SCT does not generate or explain the vastly complex bodies of information that the other schools of the University focus upon. That’s why, with the help of the School of Christian Thought to guide our core convictions, it is still up to all the disciplines and schools of the University to incorporate the assumptions of a Christian worldview into their own research, thinking, and teaching, and to apply those beliefs to their own disciplines.

(It would take too long to discuss it, but one of the most important functions of our Department of Philosophy within the School of Humanities is to help all of us at the University ask the right questions and integrate the content of the Christian faith with the questions and bodies of information that the various academic disciplines deal with).

What is the School of the Christian Thought?

The Department of Classics and Biblical Languages represents a historic strength and a distinctive of HBU. We are one of very few universities in America that offers both an undergraduate major and a Master’s degree in biblical languages. This area teaches not only the biblical languages of Greek and Hebrew, but also Latin, which is an important language for reading classical literature, some of the oldest translations of Scripture, and many of the earliest Christian theological writings.

We also have the Department of Apologetics in the SCT. The word apologetics does not refer to apologizing for the Christian faith, but is based on the classical word apologia, which means “defending” or “providing support.” Many people in our culture do not recognize the Bible as the Word of God. As Christians, we must appeal to all the sources of knowledge to provide the authority for how and what we know. Apologetics is a way of using all we can possibly know from literature, the arts, philosophy, science, the social sciences, and the humanities – as well as Scripture – to understand the Christian faith, explain it to others, and, when necessary, defend the faith from aggressive attacks.

There is a popular – and often very shallow – propagation of the views of the so-called “new atheists.” Also, the rise of the NONES – a reference to people who check the word none in a survey when asked if they have any preferred faith – reflects the religious state of our culture. Countering atheism, agnosticism, or indifference requires an articulate faith that has a broad understanding of the world, and that is the goal of apologetics. All of the disciplines of the University can be used, among other things, as informational resources to provide – with the help of communication skills and philosophical questions – arguments to defend and support the Christian faith. Apologetics, in many ways, has become the new form of missions and evangelism.

Finally, HBU now has in the School of Christian Thought a professional school – Houston Theological Seminary (HTS). This is our newest school, and it represents a great partnership with Second Baptist Church of Houston. Seminaries are the professional schools that offer the Master of Divinity (M.Div.) degree, the traditional area of study that prepares men and women to serve as ministers and leaders in the church. We are one of the very few seminaries in Houston that is actually based in Houston.

Houston Theological Seminary is off to a great start. This past year we had 15 M.Div. students who started the program, and more than 300 auditors, or “surveyors,” joined the classes. Second Baptist Church has served as a great ally and partner in this new endeavor, and we expect to see HTS continue to grow.

A Bold and Proud Claim

The School of Christian Thought is a historic distinctive of HBU, but it reminds me of something that should be said of every one of the colleges, schools, and departments at Houston Baptist University – we have some of the finest teachers in the United States and in the world. I make this claim not only because of their Christian devotion, but because of their academic credentials, their record of teaching, their care and concern for students, their publication records, and their public visibility. I encourage you to take a long look at the roster of HBU faculty. I think you’ll agree with me.

The School of Christian Thought at Houston Baptist University

The School of Christian Thought at HBU exists to:

The programs prepare students for graduate school and/or ministry. According to LinkedIn records, HBU alumni are in leadership at more than 100 churches and more than 50 Christian ministries and schools as pastors, youth pastors, children’s pastors, teachers, administrators, counselors, and more. (Note, these LinkedIn records are pulled from 12,000 of the school’s alumni who are on the platform, and the records do not differentiate between alumni of the different schools.)

Some well-known faculty include:

To see the full list of faculty in the school of Christian Thought, use this link.

I’m currently writing a young adult fantasy series about an orphan boy named Hamelin Stoop. You can learn more about the series at HamelinStoop.com or Amazon.