What a Christian school is [not] 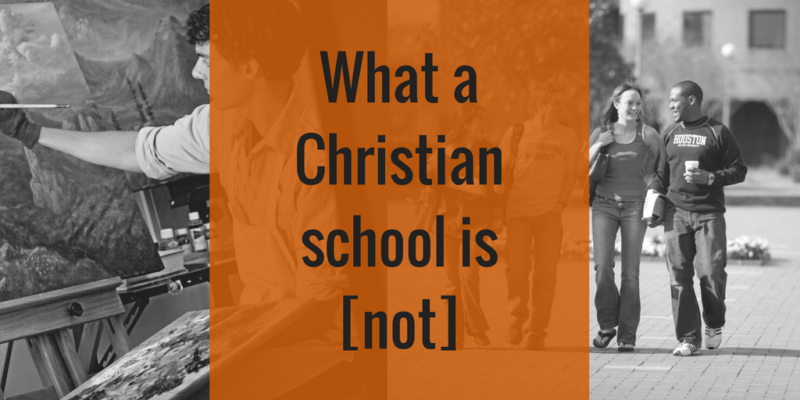 4 notions that miss the mark in describing a Christian university

What is a Christian school? Houston Baptist University – note the middle word of our three word name! – is a Christian university. But what does that mean? I’ve discovered over the years that phrases like “Christian higher education” or “a Christian university” can conjure up a lot of different notions all along a spectrum from – “that’s a place that teaches people how to be ministers and missionaries” to “it’s pretty much like a normal university, but it throws in a couple of religion classes and offers a chapel.”

For parents, students, and curious bystanders, I would like to address four specific notions that I have encountered during my time in higher education.

Notion #1: A Christian university is a place that teaches people how to be ministers and missionaries.

There are indeed places where men and women receive instruction on how to be ministers, pastors, and missionaries. Certainly those professions can be part of the curriculum of a Christian university, and many of our students at HBU are preparing for ministry — but it’s a small percentage of our total number of students. Institutions where all or nearly all of the student population are receiving an education specifically designed to prepare them for ministry are typically called either Bible colleges or seminaries, depending upon the level of instruction. HBU has a seminary – Houston Theological Seminary – and other courses in our School of Christian Thought designed to prepare students for ministry, but, again, preparation for ministry, while an important discipline within our total program of instruction, is a relatively small percentage of what we do.

At HBU we offer more than 40 bachelor’s degrees in humanities and sciences, some 17 different master’s degrees, and have just begun to offer our first doctoral program, an Ed.D. in executive educational leadership.  We are, therefore, a comprehensive university offering more than 65 different degree programs.

Notion #2: A Christian university is a college where all the classes start in prayer and teach the Bible.

We do teach the Christian Scriptures, but specific instruction in the Scriptures only occurs in classes that are designated for Bible study. Certainly any of our professors are free and no doubt encouraged to make thoughtful use of the Scriptures as they are relevant to their given disciplines–just as a side note, that kind of intellectual freedom would typically not be allowed for a professor in a public school–but the explicit use of the Bible in a given class is a matter of the professor’s own choice. Every class provides students an opportunity to think about how the subject matter under discussion might relate to the Scriptures or any other topic or field of study, but, again, that’s a matter of intellectual freedom as it exists for both students and faculty in every class at a place like Houston Baptist University.

Prayer in the classroom would also be a matter left to the professor. My guess is that most classes at HBU are not started with a prayer, but I’ve never known a student at HBU who asked for prayer in or out of the classroom to be turned down. All may, some will, and none must.

Notion #3: A Christian university is a hyper religious place with a lot of very restrictive rules about what you can say and think and do.

That would probably require a longer discussion on a case by case basis. The fact is, every university has rules about behavior, just as there are commonly accepted rules for civil conduct in all of life. At HBU, we don’t allow drug or alcohol use on campus, and our dormitories are set up to reflect our beliefs that the goodness of sexual experience is reserved for marriage between a man and a woman. Beyond that, our standards about conversation, questions, and what can be discussed inside and outside the classroom are probably broader than the restrictive speech codes that are now highly popular on many public university campuses. We believe all truth is God’s truth and that all questions are fair game. In the freedom of a truly open classroom atmosphere, there’s nothing that students should be afraid to ask in a civil way.

Notion #4: A Christian university is pretty much like a normal university, but it throws in a couple of religion classes and a chapel.

I would call this a minimalist view of what a Christian education is. We are not any of the stereotypes reflected in 1-3 above, but 4 seems to think that a Christian university simply does everything other universities do while adding a few classes in Bible, a chapel service, and generally trying to be nice. The truth is, of course, there are many universities in America that began as Christian or church-related universities but have given up any clear-cut core of Christian identity. A truly Christian university that remains committed to biblical principles offers much more than a normal university in way of the attention that is paid not just to students’ academic lives, but their spiritual and moral development.

Are you on your college search? You may benefit from reading “Tips for being a successful college freshman.”

So, back to the original question – what is a Christian university? You can probably tell that, thus far, I don’t think any of the four general types I have suggested above are adequate to answer the question. My own attempt to describe what we do at HBU will require a little more space, so my next blogs will take up the related topic of “a Christian worldview” and how it relates to Houston Baptist University.