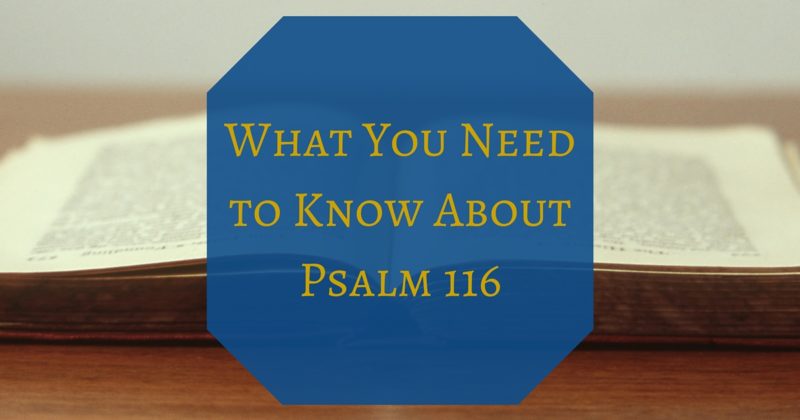 Psalm 116 has much in common with other thanksgiving Psalms, but it also has an element that’s a bit unusual: the Psalmist identifies the specific reason for his thanksgiving. He was near death, he cried out to the Lord for rescue, and the God of covenant mercy, grace, and blessing rescued him. The Psalmist goes on to say that he will thank the Lord in worship.

Paul echoes this very Psalm when he tells the church at Corinth about the afflictions he’s endured in Asia:

…we were burdened excessively, beyond our strength, so that we despaired of life; indeed, we had the sentence of death within ourselves so that we would not trust in ourselves, but in God who raises the dead. (2 Corinthians 1:8-9)

Both Paul and the Psalmist speak of a near brush with death, and both tell how the Lord acted to rescue them.

The Pattern of Scripture

This is a large Biblical pattern: God in His mercy has acted on our behalf, and therefore, because of His mercy, we must respond in worship, in obedience, and in doing God’s work. We live for the Lord out of gratitude and obligation; we are obligated to Him because of what He has done for us.

This pattern is as old as Scripture itself. Take, for example, the children of Israel. After the Lord had mercifully delivered them out of slavery in Egypt, He gave them the Ten Commandments at Mount Sinai. He told them, in other words, “Here is how you must now respond to My mercy in order to be faithful to our covenant.”

The Bible tells one comprehensive story. Here is a blog detailing the Story of the Bible.

You’ll find the same pattern in the book of Jonah. Jonah, of course, was disobedient, so the Lord made a great fish swallow him up after he was thrown overboard during a storm at sea. Jonah cried out to the Lord and was rescued. He responded in worship:

But I will sacrifice to You with the voice of thanksgiving.
That which I have vowed I will pay.
Salvation is from the Lord. (Jonah 2:9)

The cords of death encompassed me
And the terrors of Sheol came upon me;
I found distress and sorrow.
Then I called upon the name of the Lord:
“O Lord, I beseech You, save my life!”(Psalm 116:3-4)

“The terrors,” by the way, is a word that sometimes can refer, in ancient Semitic religions, to the demons.

Psalm 116 and the Good Samaritan

The Psalmist goes on to talk about the mercies of the Covenant God of Israel:

Gracious is the Lord, and righteous;
Yes, our God is compassionate. (Psalm 116:5)

The word gracious here refers to God’s merciful forgiveness, and the word righteous refers to His faithfulness—the fact that He keeps His word.

The word compassionate is the same word that’s used to describe the good Samaritan who cared for the man left for dead on the road. (Luke 10:30-37) It’s the word Luke used to describe Jesus’ actions in the town of Nain, where a young man, the only son of a widow, had died. Jesus felt compassion for the woman. He stopped the funeral procession and put His hand on the young man’s coffin, making Himself ritually unclean. He raised the young man from the dead and presented him to his mother. (Luke 7:11-17)

The Lord preserves the simple;
I was brought low, and He saved me. (Psalm 116:6)

The Psalmist responds to the Lord’s gracious compassion in worship. First, he says, he’ll pay his vows to the Lord. Apparently he promised God something when he was in danger of death. Even if he hadn’t made vows, however, he would still have owed the Lord a thank offering. In the sacrificial system, when the Lord did something special for you, then “from a glad heart” you could bring a grain or liquid offering from the fruit of your field:

I shall lift up the cup of salvation
And call upon the name of the Lord.
I shall pay my vows to the Lord,
Oh may it be in the presence of all His people.(Psalm 116:13-14)

How God Responds to Death

We owe God not only our thanks but also our very existence and our obedience. Jesus is Lord whether we were raised to believe that or not.

Precious in the sight of the Lord
Is the death of His godly ones. (Psalm 116:15)

The word precious here might also be translated costly. It can even mean painfully grievous to the Lord.

In other words, the Lord knows when His people die. It’s not a casual or trivial event, even for God. The Psalmist himself found that out when he was at the doorstep of death and he cried to God—God cared about what was happening to him.

What Does All This Mean for You?

Though we can never pay God back for what He’s done for us, nonetheless we are obligated to live according to the new creation, the new ethics:

Paul says we are individually members of one another in the body of Christ. We are inextricably linked to all the rest of the fellowship. Christianity has to be lived within the fellowship of a community of worship and service. We cannot serve Christ fully unless we appreciate that we belong in a community of fellowship and worship.

You can read more about the Body of Christ here.

May the Lord God make us a people who know, with the Psalmist, that we are obligated to the Lord for His faithfulness to us. And may we, in response to His mercies, live faithfully as new creatures in Christ Jesus our Lord.

The preceding was adapted by Rachel Motte from a sermon Dr. Sloan delivered at Kingsland Baptist Church on August 11, 2013. A video of his original remarks may be viewed here.