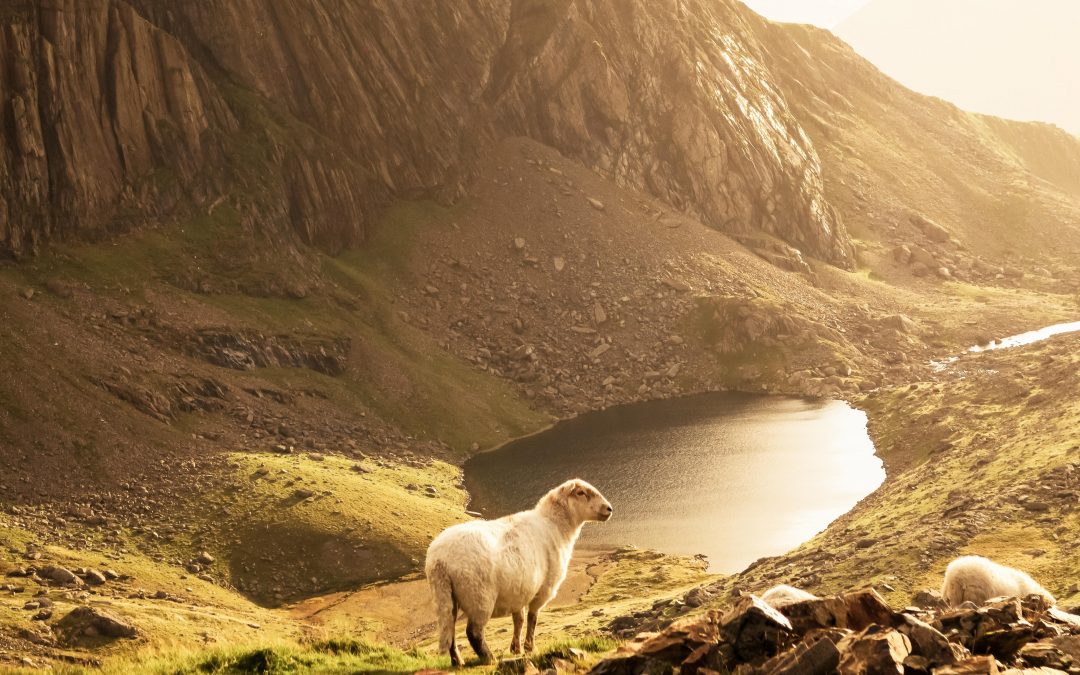 The notion of the Lord as our Shepherd and we His people as His sheep is a common idea in Scripture. Most of these shepherd images may be grouped into one of two contexts.

God Brought His Flock Out of Egypt

First, the Lord is the shepherd who brought Israel His flock up out of the land of Egypt and led them through the wilderness.

The Israelites were slaves in Egypt. The Lord sent plagues upon the Egyptians until the pharaoh agreed to release them. He then caused the Red Sea to open up a path for the Israelites and to flow over the Egyptian armies when pharaoh changed his mind and set out to force the Lord’s people back into slavery:

But He led forth His own people like sheep
And guided them in the wilderness like a flock;
He led them safely, so that they did not fear;
But the sea engulfed their enemies. (Psalm 78:52)

God Regathered His Flock After The Exile

A second major context in which God is described as the shepherd is described in Psalm 80. The historical moment has shifted; centuries have passed since the events recalled in Psalm 78. The nation of Israel has become idolatrous, and the Lord their God has punished them. Both the Northern and Southern kingdoms of Israel have been scattered and sent into exile. God will now, like a shepherd, regather the scattered flock and lead His people back to their land:

Oh, give ear, Shepherd of Israel,
You who lead Joseph like a flock;
You who are enthroned above the cherubim, shine forth!
Before Ephraim and Benjamin and Manasseh, stir up
Your power
And come to save us!
O God, restore us
And cause Your face to shine upon us, and we will be saved.
(Psalm 80:1-3)

The Psalmist is drawing here from a blessing in the book of Numbers:

The prayer here is that the God of Israel, the shepherd, will radiate His power and His might.

Why does the shepherd carry a rod?

The shepherd is gentle to His flock, but He also carries a weapon. He has a staff and a rod — a club — that He uses to beat off wild animals.

This shepherd, with His rod and His staff, is also the King of Israel. In Psalm 2 the Lord says,

You are My Son,
Today I have begotten You.
Ask of Me, and I will surely give the nations as Your inheritance,
And the very ends of the earth as Your possession.
You shall break them with a rod of iron,
You shall shatter them like earthenware. (Psalm 2:7-9)

The Shepherd-King’s rod shatters the enemies of Israel.

God’s Flock is His Treasure

The book of Isaiah also describes the Shepherd-King who saves Israel:

Behold, the Lord God will come with might,
With His arm ruling for Him.
Behold His reward is with Him
And His recompense before Him.
Like a shepherd He will tend His flock,
In His arm He will gather the lambs
And carry them in His bosom;
He will gently lead the nursing ewes. (Isaiah 40:10-11)

What does it mean for God’s “recompense” to be “before Him?” It means that His people—His flock—are His treasure. The Lord will regather His scattered flock. The mighty Shepherd King with His rod—the Lord God Himself—will lead His people home.

You see the same images again in Jeremiah 23. In this passage the shepherds of Israel—the judges, priests, and princes—have not been faithful shepherds. They have not judged righteously or instructed faithfully:

You have scattered My flock and driven them away, and have not attended to them; behold, I am about to attend to you for the evil of your deeds… Then I Myself will gather the remnant of My flock out of all the countries where I have driven them and bring them back to their pasture, and they will be fruitful and multiply. (Jeremiah 23:2-2)

Adam and Eve failed, but Abraham took up their work when he entered into a covenant with God. God told Abraham, “I will make of you a great nation, and from you all the nations of the earth shall be blessed.” In other words, Abraham would go on to “be fruitful and multiply.” You can read a summary of the story of Scripture, including Adam, Eve, and Abraham here.

You’re no doubt already familiar with the famous shepherd imagery of Psalm 23; I’ll take a close look at that Psalm in my next post.

The preceding was adapted by Rachel Motte from a sermon Dr. Sloan delivered at Kingsland Baptist Church on June 30, 2013. A video of his original remarks may be viewed here.