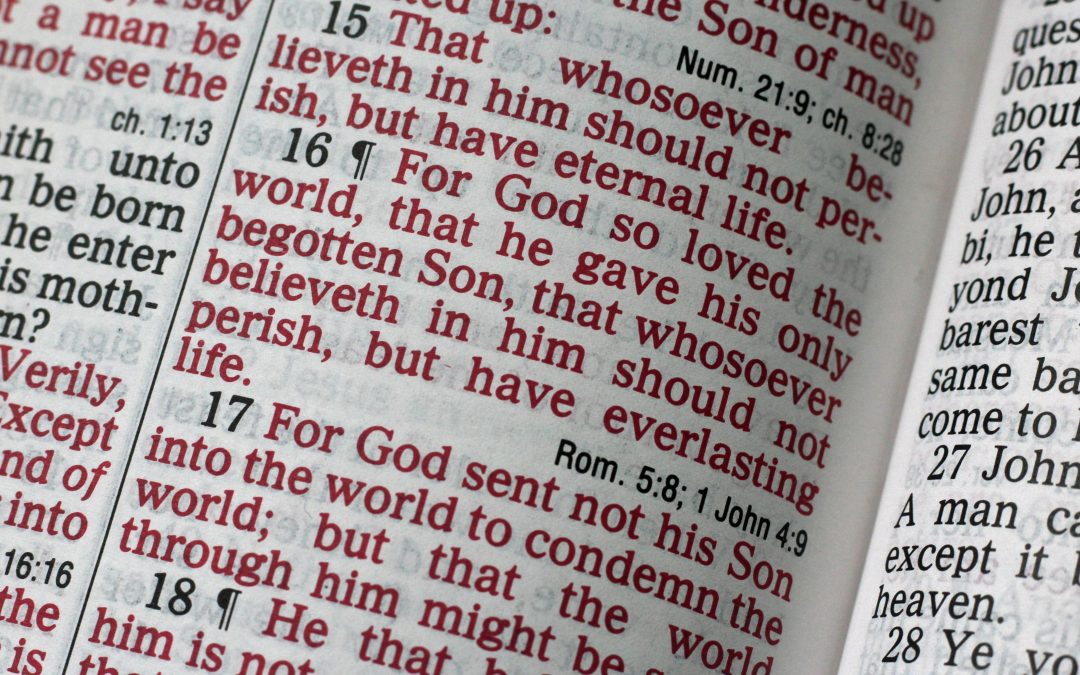 Did you know that one little word has probably caused you to misinterpret one of the most well-known verses in the Bible?

Probably the best-known verse in all the Bible is John 3:16. Sad to say, it may also be the most frequently misinterpreted verse in all of Scripture:

For God so loved the world that He gave His only begotten Son, that whosoever believes in Him will not perish but have everlasting life. (John 3:16)

How did God love the world?

The little word “so” in John 3:16 is frequently misunderstood. This is an easy mistake to make because the word is used in many different ways in English. You can use it as an insult: “You so and so!” or you can say, “Graduates, do you think you’re going to get a job? So, the economy is bad…” The word “so” there is a connecting word that bears little grammatical relationship to the sentence.

The word “so” has several basic meanings. One meaning is “extent.” As in, “I love you so much, I’m going to hug you.” That’s the way people normally interpret John 3:16: “For God SO loved the world that He gave His Son.” That’s actually not what the word means in that context.

The word can also refer to the manner or way in which something happens: “I tried to drive to my final exam, and I ran out of gas. I finally got gas in the car, and then I got a flat tire. I got the flat fixed and arrived at school only to find out that I had written down the wrong time for the final exam. And so my day went.”

That’s the way it’s used in John 3:16. To paraphrase: in this way, God loved the world that He gave His only begotten Son. That whoever believes in Him will not perish but have everlasting life.

How to Fulfill the Law

Love is another word that can easily become misleading in John 3:16 and in our lives. We have to be careful to understand what is meant by the word love. In English, the word has a full range of meanings, some of which are not what the Scriptures mean when they talk about love. When it is properly interpreted and expressed, love is powerfully indicative of what it means to live the kind of life that God has called us to live—the kind of life that is to be found in Jesus Christ.

Paul taught, for example, that love is the fulfillment of the law:

Owe nothing to anyone except to love one another, for he who loves his neighbor has fulfilled the law. (Romans 13:8)

When Jesus was asked, “What is the greatest commandment?” he answered,

Paul always refers to love in connection with the cross of Jesus:

God demonstrates His love toward us, in that while we were yet sinners, Christ died for us. (Romans 5:8)

The word love, in Scripture, is defined by God’s self-giving, merciful action, historically revealed through the person of Jesus Christ. When Paul wants to speak to husbands and wives, for example, he says, “Husbands, love your wives as Christ loved the church and gave Himself up for her.” (Ephesians 5:25) The word love is defined by the historical moment of Jesus’ death on the cross.

Learn more about the biblical definition of love in my blog “The Truth about Love.”

What does this love mean for you?

Keep two things in mind when you see the word “love” used in various contexts:

2. Remember that we’re called to express love in the world. We are not called to a grasping, power-seeking attitude, but to the self-giving extension of ourselves on behalf of others.

You are loved by God through Jesus the crucified Lord. He has risen from the dead, so His love has conquered. Live your life sacrificially on behalf of others, “just as the Son of Man did not come to be served, but to serve, and to give His life a ransom for many.” (Matthew 20:28)

The preceding was adapted by Rachel Motte from a commencement address Dr. Robert B. Sloan delivered at Houston Baptist University on August 8, 2015. A video of his original remarks my be viewed here.