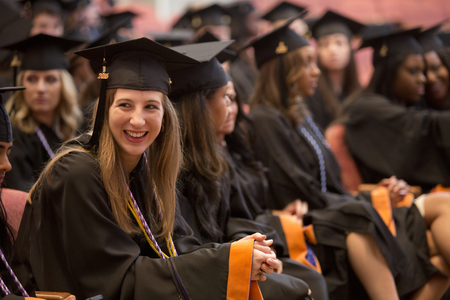 I wish our world were such that we could speak in a light and breezy tone about the future to our graduates, but, of course, that’s not the kind of world in which we live.

The Psalmist reminds us that the Lord prepares a table for us in the presence of our enemies. Though we walk through the valley of the shadow of death, we fear no evil. The last phrase of Psalm 23, “I will dwell in the house of the Lord forever” is a statement of trust in the faithfulness of God. He preserves and protects His people.

We live, not only under the shadow of death, but also under the umbrella of a marvelous hope that comes to us from God revealed through Jesus Christ. Our Lord charged His disciples in Matthew 10,

“Behold, I send you out as sheep in the midst of wolves; so be shrewd as serpents and innocent as doves.” (Matthew 10:16)

It’s a strange mixture of metaphors. Our Lord, knowing that Satan himself is called the serpent of old, is telling us to be as shrewd as serpents. Of course, we are also to be as harmless as doves.

Graduates, do not grow weary in doing good.

The passage we read opens up with the exhortation, “Stir up again.” Paul used a word here that may also be used to describe a fire that’s about to go out:

“… kindle afresh the gift of God which is in you through the laying on of my hands. For God has not given us a spirit of timidity, but of power and love and discipline.” (2 Timothy 1:6-7)

“For God has not given us a spirit of timidity…”

The “spirit” referenced here is the Holy Spirit. “Timidity” is too polite a translation for Paul’s original word here; the term actually means cowardice. “God has not given us a spirit of cowardice.” We have not received a spirit of cowardice, but a spirit of love and power—the power of God—and sound mindedness, a disciplined way of thinking.

Timothy faced adversity. He was probably at Ephesus, and we know from 1 and 2 Timothy that Ephesus was experiencing both the advance of false teachers, and failure within the church itself.

We live in a world where violence, greed, selfishness, and hedonism abound. We are confronted each day with clashing convictions and lifestyles—people have differing ideas about God, faith, governance, family, marriage, and the value of life.

Shadrach, Meshach, and Abednego also lived in a hostile culture. Read about their faith here.

Therefore do not be ashamed of the testimony of our Lord or of me His prisoner, but join with me in suffering for the gospel according to the power of God. (2 Timothy 1:8)

This is not exactly the kind of word anyone wants to deliver on such a happy occasion as this, but it is a realistic word. In the midst of our celebration and joy there is also, above and beneath us, running straight through us, the wrestling that Paul refers to Ephesians 6:

Guard the treasure that has been entrusted to you.

Graduates, you’ve received a fabulous education here at HBU. You have received something that people all over this world would truly sacrifice a great deal for; in fact, many of you on the stage and in the audience already have.

Guard the treasure that has been entrusted to you. Live faithfully with what you have been given. Your education fits you for life in the world whatever your future may be—not only in terms of competencies and expertise, but also, we believe, in terms of morality and spirituality. You have been prepared to live as the kind of person that God has made you and called you to be.

Live for Him now. It’s an investment in your future:

Paul lived these truths—and so should you.

Live in a way that is faithful to everything you know to be true and right. Only then can you experience what Paul knew to be true in his life.

Paul wrote to Timothy from prison, where he’d suffered terribly. He was beaten numerous times with rods, and he received 39 lashes on five separate occasions. He’d been in danger on the highways, in danger from violent men and robbers, and he was terribly anxious for his friends who were likewise in danger.

Paul encouraged Timothy with an echo of Psalm 9, where the Psalmist refers to the faithfulness of God towards all those who know and trust Him:

For this reason I also suffer these things, but I am not ashamed; for I know whom I have believed and I am convinced that He is able to guard what I have entrusted to Him until that day. (2 Timothy 1:12)

All you give in faithfulness in your life will not be forgotten. It will be held and kept in the hands of God. Guard the treasure that you’ve been given through Jesus Christ. May God bless you.

The preceding was adapted by Rachel Motte from Dr. Robert Sloan’s charge to the graduates of Houston Baptist University on May 16, 2015.