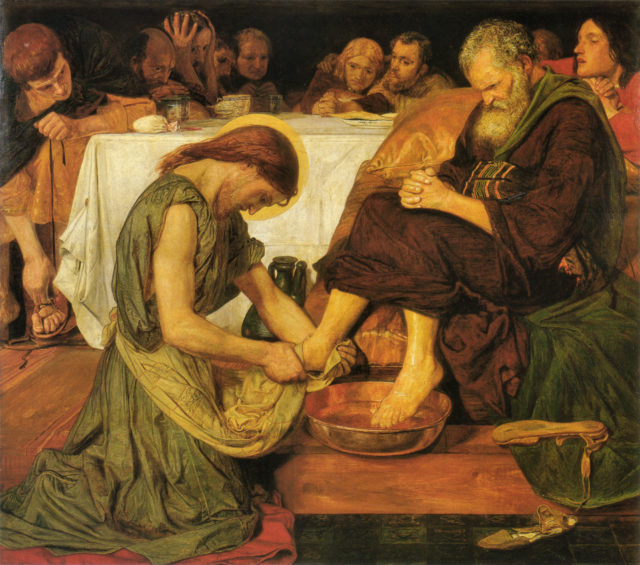 In John 13 we read the unusual story of Jesus’ washing of the disciples’ feet on the occasion of the Last Supper.

The word has a much broader meaning than that when we consider Old Testament parables.  In the Old Testament, the best example of a spoken parable is the account of Nathan confronting David.  David thought he had hidden the fact of his adultery, but the Lord knew otherwise. Nathan the prophet confronted David by telling him the story of a wealthy, arrogant man who stole a little ewe lamb from a poor man. David was furious:

As the LORD lives, surely the man who has done this deserves to die. (2 Samuel 12:5)

Nathan looked at him and said, “You are the man!” (2 Samuel 12:7)  In taking Uriah’s wife, David had acted just like the man in Nathan’s parable.

The Play’s the Thing

The Old Testament prophets typically acted out the stories they wanted to give to their audiences.  Think of the prophet Ezekiel, who demonstrated the siege of Jerusalem using a model of the city. (Ezekiel 4) Think of Jeremiah, who buried a loincloth and left it in the ground until it was ruined:

Thus says the LORD, ‘Just so will I destroy the pride of Judah and the great pride of Jerusalem…’ (Jeremiah 13:9)

Jesus taught using both spoken and acted parables in the New Testament.  Think of the Triumphal Entry, when Jesus entered into Jerusalem on the back of the donkey’s colt.  He clearly did this in fulfillment of the prophecy about Israel’s king who would come to Israel “mounted on a donkey, Even on a colt, the foal of a donkey” (Zechariah 9:9), but He also intended his ride into Jerusalem to serve as an acted parable.

Jesus acted out another parable when He washed the feet of His disciples in John 13:

Jesus, knowing that the Father had given all things into His hands, and that He had come forth from God and was going back to God, got up from supper, and laid aside His garments; and taking a towel, He girded Himself. Then He poured water into the basin, and began to wash the disciples’ feet and to wipe them with the towel with which He was girded. (John 13:3-5)

In Luke’s account, we learn that the disciples were arguing about who was the greatest when Jesus served them in this way at the last supper. John does not mention the argument, but it is clear that Jesus wanted to give His disciples a vivid, memorable example of service and servanthood. Read more about the example Jesus has given us of true leadership.

All the World’s a Stage

John’s language in this passage is deliberately descriptive. You can imagine Our Lord kneeling at the feet of each disciple.  You can imagine our Lord as, with His own hands, He takes the water and washes their feet to remove the dust of the journey, then dries their feet with the towel wrapped around His waist.