The Glory of the Cross (part 2) 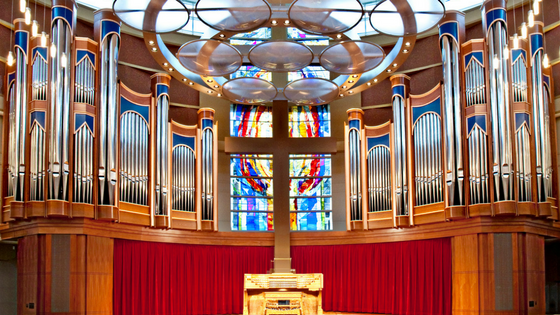 The glory of God has come to us in the Person of Jesus Christ:

And the Word became flesh, and dwelt among us, and we saw His glory, glory as of the only begotten from the Father, full of grace and truth. (John 1:14)

The Gospel of John makes it clear that the glory of God, the presence of God, is none other than the person of Jesus Himself.

I’ve explained elsewhere that the word glory, in Scripture, often refers to more than just the acclaim and attention we imagine when we use the word in English. The word is used in three different ways in the Gospel of John:

Look at the way Jesus used the word in His dispute with the religious leaders in John 5:

In this passage, John does use the word to mean honor or fame, just as we would use it in English. Jesus is saying here that the ultimate source of the praise he receives does not come from mankind; they do not see in Jesus the presence of the Father.  The religious leaders to whom He was speaking were in the habit of praising one another rather than giving God the praise that He is due.

John also uses the word glory in a second sense in his gospel.  In John 7, for example, the word refers to Jesus’ resurrection and ascension. The Apostle Paul also used the word in this way:

Resurrected bodies are glorified; they are shot through with the presence of God.

Now on the last day, the great day of the feast, Jesus stood and cried out, saying, “If anyone is thirsty, let him come to me and drink.”

Jesus made this offer after a very moving ceremony that had to do with the drawing of the water at the Feast of Tabernacles. He continued,

He who believes in Me, as the Scripture said, ‘From his innermost being will flow rivers of living water.’ (John 7:38)

Jesus refers to Himself in this passage as this source of the waters of everlasting life. John follows this statement from Jesus with His own inspired editorial explanation:

But this He spoke of the Spirit, whom those who believed in Him were to receive; for the Spirit was not yet given, because Jesus was not yet glorified. (John 7:39)

Most scholars agree that the word glorified there refers to the fact of Jesus’ resurrection and ascension and His enthronement at the right hand of God.  In this passage Jesus has not yet been enthroned, therefore He has not yet poured out his Spirit.  His disciples did not at that time understand Jesus’ statement about the “rivers of living water,” and they would not understand it until after Jesus was resurrected, ascended, and raised to the right hand of God.

Glory Even in Death

Following His triumphal entry, John tells us that Jesus is confronted by a group of Greeks. (John 12)  Up until this point, Jesus has repeatedly said throughout the Gospel of John that his hour has not yet come. In the coming of these Greeks following the triumphal entry, He knows that the hour of suffering is before Him. Here we begin to sense the unusual notion that the glorification of Jesus here has to do not only with His future resurrection and ascension, but also with to His coming death:

Truly, truly, I say to you, unless a grain of wheat falls into the earth and dies, it remains alone; but if it dies, it bears much fruit…  Now my soul has become troubled; and what shall I say, ‘Father, save Me from this hour’? But for this purpose I came to this hour.  Father, glorify Your name. (John 12:24, 27)

Jesus is praying, in other words, “Father, grant me the courage and the strength to complete the messianic mission for which you have sent me, namely, to die for the sins of mankind.”  A voice from heaven answered Jesus’ prayer:

Jesus glorified His Father in His coming, His miracles and His teaching— and He would glorify Him again in His death.

We can think of the powerful Presence of God overshadowing the tabernacle in the wilderness, or overwhelming Solomon’s temple, or impressively revealed in Ezekiel’s apocalyptic vision of the wheel.  And we can certainly think of the glory of God as being an appropriate term to refer to the explosive energy and power of God that raised Jesus from the dead and enthroned Him in His right hand.  But the glory of God, according to the Gospel of John, is also strangely and mysteriously present in the death of Jesus.

Is Your Life Full of Glory?

The word love is closely related to the word glory in the Gospel of John. We must manifest the glory of God in loving, sacrificial, service for others, just as Jesus manifested that glory in His love for us:

Is your life full of glory?  As followers of Jesus Christ, as those who live under the shadow of the cross, our answer is and ought to continue to be a resounding “yes.”