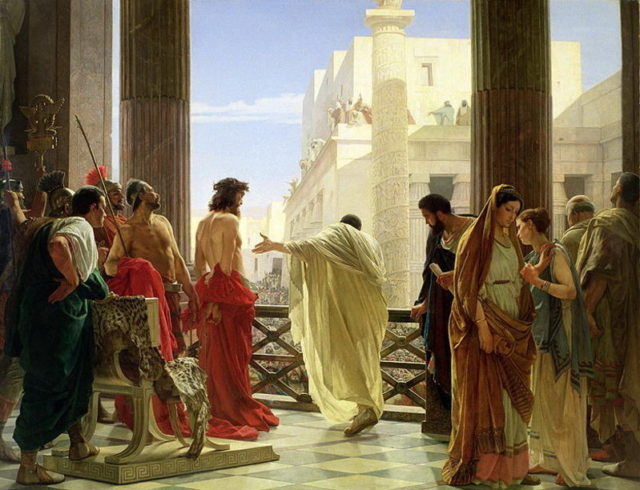 Pilate, the man who gave our Lord Jesus Christ over to the angry mob to be crucified, initially tried to save Jesus’ life.

He tried several times to convince the Jewish authorities to let Jesus go free because, he told them, “I find no guilt in Him.” (John 18:38)

Why would the powerful leader of a Roman outpost care what happened to a particular citizen from an obscure town? Perhaps it was because he was afraid of Jesus.

Pilate was certainly frightened by Jesus’ responses to his questions. When Pilate asked Jesus the nature of His kingdom, for example, Jesus told him, “Everyone who is of the truth hears My voice.”  Pilate asked, “What is truth?”  His question is ironic, because Pilate was, in effect, rejecting the truth that Jesus offered him.

Pilate tried to release Jesus one more time in John 18:39:

The crowd cried out, “Not this Man, but Barabbas.” (John 18:40) Barabbas had been arrested as a freedom fighter, a guerilla. He was a violent, seditious leader, and the Romans had good reason to want to see him imprisoned.  Pilate had hoped that the custom of releasing a prisoner at Passover would allow him to release Jesus, but the crowd, stirred up by the Jewish leaders, was insistent.

Pilate may have tried other means of releasing Jesus in John 19.  He tried to arouse pity in the eyes of the assembled mob.  He wanted to dispatch Jesus without executing Him, so he ordered that Jesus be scourged.

By His Stripes, We Are Healed

We know from Roman literature that there were several methods of beating. The first was reserved for incidental crimes—arson, membership in youth gangs, and so on. This beating was often performed with sticks or with rods.

Jesus was subjected to another, more severe means of beating that involved a whip with leather thongs.  Small pieces of bone and bits of metal were attached to form small chains at the end of these leather thongs.  Jewish, Roman and Christian literature record a number of truly gruesome examples of this form of beating.

The Jewish historian Josephus referred to a time when he himself, as a commander in the Jewish army, had a man beaten with the same kind of whip that was used to torture Jesus. The man’s flesh was stripped away from his body so severely that his entrails were exposed.  Another account of this form of beating describes a man so badly injured that the bones in his back were laid bare.

This particular form of beating could kill a person though it was not prescribed as a means of execution. This may well have been the way in which the body of Jesus was so weakened that He was incapable of carrying His cross all the way to Calvary’s Mountain.

The Crowd was Unmoved

Although Jesus was subjected to an especially cruel form of scourging, it seems that Pilate may have intended this beating to serve as a kind of replacement for execution.  Perhaps the Jewish authorities might drop the case against Jesus if they could be induced to pity Him. Pilate had Jesus brought out before the crowd after His scourging. He then proclaimed, perhaps in an attempt to rouse the crowd’s pity for Jesus’ bleeding body, “ecce homo.” That is, “behold the man.”

The crowd was unmoved by the sight of Jesus’ injuries:

When the chief priests and the officers saw Him, they cried out saying, “Crucify, crucify!”  Pilate said to them, “Take Him yourselves and crucify Him, for I find no guilt in Him.” The Jews answered him, “We have a law, and by that law He ought to die because He made Himself out to be the Son of God.”(John 19:6-7)

This response left Pilate even more afraid of Jesus.  Pilate took Jesus back inside the Praetorium, away from the crowd. He asked Him, (19: 9) “Where are You from?”  Jesus gave him no answer.  Pilate was dumbfounded by Jesus’ silence and said to Him, “Don’t You know that I have authority to release You, and I have authority to crucify You?” Jesus’ mysterious answer frightened Pilate all the more:

You would have no authority over Me, unless it had been given you from above; for this reason he who delivered Me to you has the greater sin. (John 19:11)

Shall I Crucify Your King?

Pilate tried yet another time to convince the crowd to let Jesus go free. The Jewish authorities cried out against him, saying, “You are no amicus Caesare;” you are no friend of Caesar.  All Roman Senators were called “Friend of Caesar,” but this particular title could also be given to select individuals. There is some evidence that Pilate himself, by virtue of his political connections with Sejanus, a very powerful man back in Rome, had been given this honorific title.  The Jewish religious leaders knew of this title, and they used it against him, both politically, and psychologically.

It worked: “When Pilate therefore heard these words, he brought Jesus out.” (John 19:13) Pilate took his place on the judgment seat, and the crowd knew this meant that he would finally pass sentence and judgment against Jesus.

Instead of immediately pronouncing judgment, Pilate tried to save Jesus once more, in a weak hearted attempt that he must have known would fail: “Behold your King!”  (John 19:14) The Jewish authorities were undeterred. Pilate asked them, “Shall I crucify your King?” (John 19:15)  Then the chief priests, in a psychological coup de grace answered, “we have no king but Caesar.” (John 19:15)

How ironic it is that these chief priests, these domestic heads of the people who were so passionately opposed to the lordship of Caesar, should pronounce these words.

No King But Caesar

This particular portion of the Roman Empire was where the Romans had found the deepest hatred of the Roman Emperor and the most serious opposition to his rule. So great was Jewish hatred of Roman rule that the Romans were compelled to bring an additional Legion of troops into Jerusalem at every Passover to keep the peace. Even so, the Jewish authorities declared, “we have no king but Caesar.”

Not only did the high priests deny Jesus’ kingship, but they also denied any king other than Caesar. They were, in effect, denying the promises of the Jewish religion, the promises of the covenant.  They chose to deny themselves the Messianic hope that was theirs as Jewish people when they claimed not only that Jesus was not their Messiah, but also that they would have no king but Caesar.

When Pilate heard this, he finally pronounced judgment.

The story doesn’t end there. I’ll continue to take a close look at John’s account of Jesus’ crucifixion in my next blog post. Thank you for joining me as we prepare together for the coming Easter season.

The preceding was adapted by Rachel Motte from a sermon Dr. Sloan delivered at Tallowood Baptist Church on March 18, 1990.