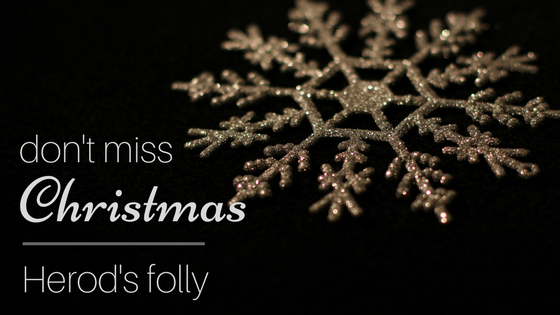 Herod, the King of Judea when Jesus was born, was a remarkable madman. He is remembered for his cruelty, and not only because of the famous “slaughter of the innocents” described in Matthew 2:16-18:

When Herod saw that he had been tricked… he became very enraged, and he sent and slew all the male children who were in Bethlehem and all its vicinity, from two years old and under… (Matthew 2:16)

Herod had done this sort of thing before. He was absolutely paranoid that he would one day be supplanted and replaced. He married many times, and he was so fearful that one of his sons might someday replace him as king that he had several of his own children killed.

Herod, King of the Jews

Jews at that time comprised about 10% of the Roman empire’s population, and Herod was desperate to retain control over them. He regarded himself as the king of all Jews everywhere—not just in Palestine, but all over the Roman world.

Herod was a formidable figure even aside from his cruelty. He was a great builder and artist, for instance.  He helped direct the building of certain Roman aqueducts, and he used public funds to transport water into needed areas in and around Judea.

Herod was despotic, yet he did have certain political graces. He built Hellenistic cities, and he worked to allow Greek literature, philosophy, and ways of life to become a part of the Jewish experience. A lot of Jews didn’t trust him because they thought he was drawing them away from their traditions; on the other hand, Herod also protected the Jews from certain adverse actions that the Romans might have taken. He was a shrewd politician. When he found himself on the wrong side in the Roman Civil War, he somehow managed to ingratiate himself to Caesar Augustus, who appointed him king of Judea and of the Jews.

Herod was well versed in Jewish tradition; he was himself part Jewish, and he had a Jewish wife. Years later, Paul wrote in Acts 26 that he was glad to make his defense before one of Herod’s descendents:

I consider myself fortunate, King Agrippa, that I am about to make my defense before you today; especially because you are an expert in all customs and questions among the Jews. (Matthew 26:2-3)

So it was with King Agrippa’s forefather, Herod the Great. Herod knew the Jewish experience.

Read about the true King of the Jews in this blog.

Herod and the Wise Men

When the Wise Men came into Jerusalem and created a stir saying “Where is he who has been born King of the Jews? For we saw His star in the east and have come to worship Him” (Matthew 2:2), Herod knew enough to call in the Jewish leaders and ask where the Messiah was to be born. They answered him with the Scriptures, from the prophet Micah:

And you, Bethlehem, land of Judah, are by no means least among the leaders of Judah; for out of you shall come forth a ruler who will shepherd My people Israel. (Matthew 2:6)

When Herod learned this, he told the Wise Men,

Go and search carefully for the Child; and when you have found Him, report to me so that I too may come and worship Him. (Matthew 2:8)

The text says that the Wise Men heard what Herod said. (Matthew 2:9) They knew he was being deceptive. They found Jesus with Mary and Joseph, and they gave Him gifts of gold, frankincense, and myrrh. Then, having been warned by God in a dream—just as Joseph had been warned earlier—they decided not to go back through Jerusalem. They departed for their own country by another path.

What happened to the Wise Men?

We don’t know just what happened to the Wise Men after they left the story.  I’d like to think that they tried to learn more about this king who was born, this itinerant preacher and miracle worker. Did they ever learn that He was crucified? Did anyone tell them when He was raised from the dead?

This much we know: they were honest seekers after the truth. They used means of divination that we wouldn’t put much stock in today, but God used those ancient ways to bring them to the light. He put a star in the heavens, and the Wise Men knew enough to follow it.

God honors those who seek Him. Those of us who already know Him must continue to seek Him. He also honors people who don’t yet know Him, but earnestly want to know Him.

The Wise Men were sincere seekers. They genuinely wanted to know, and they were prepared for God to use them in this pivotal moment of human history. All the prophets of old had said that one day the Gentile world, the pagans, would come to worship the God of Israel. This was brought to fulfillment when the pagan Wise Men bowed the knee to the Messiah of Israel.

Herod was outraged when he learned that the Wise Men had slipped past him. He decided, based upon the time when the star had originally appeared, that all the boys in that entire region two years of age and younger should be put to the sword. Matthew tells us that even this happened in fulfillment of the Scriptures:

Then what was spoken through Jeremiah the prophet was fulfilled: A voice was heard in Ramah, weeping and great mourning, Rachel weeping for her children; and she refused to be comforted, because they were no more. (Matthew 2:17-18)

God appeared to Joseph in a dream a second time while he and his family were still in Bethlehem:

Behold, an angel of the Lord appeared to Joseph in a dream and said “Get up! Take the Child and His mother and flee to Egypt, and remain there until I tell you; for Herod is going to search for the Child to destroy Him. (Matthew 2:13)

Joseph obeyed immediately, as was his habit. Joseph was prepared to listen to God’s voice and to obey Him. Herod, on the other hand, missed the voice of God completely.

We are also called to obedience. You can read “Why You Should Choose Obedience” here.

Herod had everything—power, political connections, wealth, and an excellent education. His overbearing, overweening ego and his maniacal self-focus drove him to murder his own children and to order the deaths of many other young innocents.

When Herod knew that he’d reached the end of his life, he had a list of Jewish leaders prepared. He sent out an edict that on the day he died, these Jewish men were to be executed. Herod knew that he was hated and despised. He wanted to make sure that there would be mourning throughout the land on the day he died. The edict was never carried out, but those families lived in fear, for a time, of this tyrant who would say and do anything to further his own egomaniacal drives for power.

Don’t let there be so much noise around that you can’t hear the voice of God. Don’t be like Herod, whose drive for self indulgence and self gratification and power caused him to miss the point of the birth of the Son of God.

We have the blessing of knowing the end of the story. Let us earnestly and sincerely seek to know more of God, to know more of His truth, and to be more faithful to live out what God has commanded us to do in this world. Don’t miss Christmas.

Read more about what God is doing in the world, the large story of the Bible, in this blog.

The preceding was adapted by Rachel Motte from a sermon Dr. Sloan delivered at Kingsland Baptist Church on December 1, 2013. A video of his original remarks may be viewed here.