Don’t Miss Christmas: Are You Ready? 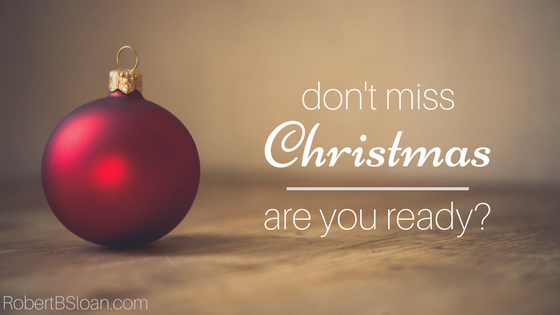 Christmas is coming. Are you ready? It’s important that we not miss the heart of Christmas—what it’s all about.

Don’t miss Christmas by being so loud and frenetic that you don’t have the opportunity to hear the Lord speaking to you. He longs to speak to you and to guide you.

You’re no doubt familiar with Jesus’ earthly father, Joseph, and with the Wise Men from the East and the wicked King Herod. I hope to introduce you to a side of these characters you might never have considered before.

As you think about Christmas and read the Christmas story over the next few weeks, I want you to ask yourself: who might have missed Christmas but didn’t, and who did miss Christmas? Which characters were prepared for the first Christmas, and how did God prepare them?

Joseph was a good man.

I want to look, first of all, at the story of Joseph. Joseph is a wonderful character. He is first introduced to us as Mary’s betrothed:

Now the birth of Jesus Christ was as follows: when his mother Mary had been betrothed to Joseph, before they came together she was found to be with child by the Holy Spirit. (Matthew 1:18)

Joseph and Mary were officially engaged. This was a legally binding contract; the engagement could only be broken if she were found to be impure.

Joseph her husband, being a righteous man and not wanting to disgrace her, planned to send her away secretly. (Matthew 1:19)

Joseph was a good man. He didn’t want to hurt Mary, though at first he had good reason to believe she’d been unfaithful to their betrothal contract. He decided to break off their engagement privately so as not to humiliate her.

He could not possibly have imagined what would happen to him next:

But when he had considered this, behold, an angel of the Lord appeared to him in a dream, saying, “Joseph, son of David, do not be afraid to take Mary as your wife; for the Child who has been conceived in her is of the Holy Spirit. (Matthew 1:20)

The word “behold” is often used in Scripture to introduce an angel. The Lord is, in some way, about to give a message, a revelation.

Notice that the angel addressed Joseph as “son of David.” Matthew was careful to stress, in the genealogy listed immediately before this passage (Matthew 1:1-17), that Joseph was indeed a descendant of the family of David.

Joseph was prepared to listen to the Lord.

Matthew gives us just enough information about Joseph to let us know that, somehow, Joseph was prepared for this startling revelation from the angel. He couldn’t possibly have known it was coming, and yet something in Joseph’s life had clearly prepared him for this moment.

This pattern is repeated three times in the book of Matthew:  Joseph receives instructions from a heavenly visitor in a vision, and he immediately obeys.

Joseph was ready to listen when the Lord spoke to him. He was in the habit of hearing the Scripture read. He would have also been in the habit of taking his family to the synagogue; Luke tells us that when Jesus came to His hometown, he went into the synagogue as was his custom (Luke 4:16). Not only was it a Jewish custom to go to the place of worship regularly, but Jesus’ family had obviously continued that custom. That’s the kind of habit that helped prepare Joseph for this dynamic moment in divine history. Joseph had cultivated the habits that made him willing and ready to hear the voice of God in an unusual way.

The Wise Men were ready for Christmas.

The story of the Wise Men is intermixed with the story of Joseph. Some say these strange visitors from the East were Zoroastrians. All we know for certain is that they were pagans—gentiles, not Jews. We don’t even know for certain how many of them there were. We do know that somehow, by their own means of divination and astrology, they learned that a king, the long awaited Jewish Messiah, had been born. They wanted to find Him and to present Him with gifts.

Matthew tells us that these Wise Men upset Herod and all of Jerusalem when they arrived in the city and began asking,

Where is He who has been born King of the Jews? For we saw his star in the east and have come to worship Him. (Matthew 2:2)

Why was Herod upset by this? To understand that, you need to know some things about Herod’s background, goals, and personality. I’ll say more about that in my next blog when I’ll continue to take a close look at three of the Christmas story’s “lesser” characters.

The preceding was adapted by Rachel Motte from a sermon Dr. Sloan delivered at Kingsland Baptist Church on December 1, 2013. A video of his original remarks may be viewed here.