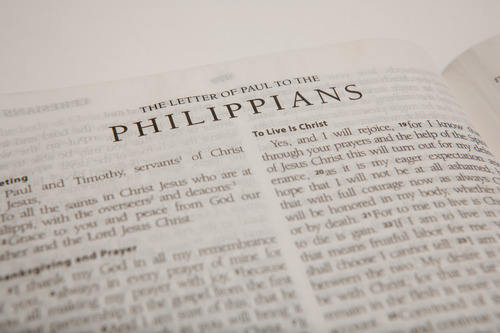 I want you to keep three words in mind as you read Philippians 1:12-26.

The first word is endurance. Remember, Paul was in prison when he wrote to the Philippians. He referred to his chains repeatedly in the opening verses of this book. These references are usually translated “imprisonment,” but the original language probably refers to the fact that he was chained to Roman soldiers. These praetorians, members of the elite Roman guard that protected Caesar and his household, were probably chained to Paul on a four-hour shift. Paul had to endure that hardship.

It was a genuine hardship. Imprisonment can involve deprivation, cold, and hunger. Paul was, after all, writing to thank the Philippians for the gift of money they’d sent. The Roman government would not have provided for his daily needs in his imprisonment, so his friends and family had to provide for him. The Philippians’ gift may have provided Paul with food, clothing, or some other basic form of comfort. Paul knew what he was talking about when he said that he had learned to be content with much, or in deprivation. He certainly had to endure real hardship and suffering because of his commitment to spread the gospel.

Start at the beginning of this series about the book of Philippians here.

The word joy, or various forms of it, is used more often in Philippians than in all the rest of Paul’s letters put together. It’s a remarkable theme. Paul speaks of rejoicing in his circumstances, of the joy he has in his immediate prospects in the near future, and of the joy that he hopes the Philippians have and that, by implication, he’ll have when he sees them again. It’s a key term, and we’ll see that as we continue this study in the weeks ahead.

The third word I want you to think about as you read this passage is the word momentum. Momentum reflects an overarching theme in the book of Philippians. Look for words like “advance” or “progress” in this passage. Paul refers in Philippians 1:12, for example, to the fact that his immediate circumstances have turned out for the greater progress, or advancement, of the gospel. He doesn’t mean progress in the sense of psychological progress—picture instead the progress of an army across a battlefield. The gospel message of the crucified and risen Jesus was moving across the Roman world, and Paul’s work was a part of that advancement.

I’ll continue looking at Philippians 1 in my next blog.

The previous was adapted from a sermon featured on Dr. Sloan’s radio program, A Higher Education, on July 18, 2013.