Founding the Church at Philippi: Acts 16-17 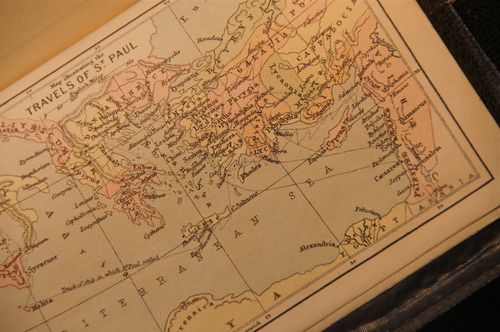 I explained in my last blog that Paul had an unusual relationship with the Christians in Philippi. He had relationships with many different churches in different places—what made Philippi different?

The founding of the church in Philippi is reflected with a lengthy narrative in the book of Acts. You’ll find it helpful to read Acts 16-17 as we study Philippians together; meanwhile, here’s a summary of the events described in those chapters.

Paul and Barnabas had a sharp disagreement at the end of Acts 15, and they decided to go their separate ways. Paul left Antioch with Silas and headed through the Cilician gates, then on to Lystra and Derbe, where they came across a young man by the name of Timothy. Timothy joined their team. Paul had Timothy circumcised so that he could go with them into the synagogues where Paul preached. Paul, Silas, and Timothy, and probably some others in their missionary team, pressed westward from Derbe and Lystra.

A Change of Plans

Luke uses some unusual language to tell us why their plans changed after they met Timothy:

And they passed through the Phrygian and Galatian region, having been forbidden by the Holy Spirit to speak the word in Asia. (Acts 16:6)

We don’t know the details of how all this worked out on the ground, but we do know that they turned northward, and once again, Luke writes that the Spirit of Jesus prevented or forbad them from going into Bithynia. They pressed westward again until they reached the eastern coast of the Aegean Sea, and the city of Troas.

Paul had a dream while they were in Troas. He saw a man from Macedonia beckoning him, saying, “Come over to Macedonia and help us.” Presumably Luke joined their team at that point, because he writes,

And when he had seen the vision, immediately we sought to go into Macedonia, concluding that God had called us to preach the gospel to them. (Acts 16:10)

From Troas the men went on to Samothrace, following the northern coast of the Aegean Sea. From there they cut across the tip of the Aegean Sea to Neapolis, where they became—as far as we know—the first ever Christian missionary team in Europe. From Neapolis they continued westward until they came to Philippi.

The Beginning of the Church at Philippi

In those days 10 Jewish heads of household were required to found a synagogue. Philippi didn’t have a synagogue, but Paul and his disciples did find several Jewish women were gathered for prayer and worship by a river, probably the Crenides River.

Paul shared with them the message of the fulfillment of Jewish hope and expectation. Luke tells us that Lydia, a wealthy merchant woman from Thyatira, opened her heart to the Lord. (Acts 16:14) Lydia was converted, and she pleaded with Paul and his friends to use her household in Philippi as their headquarters. They agreed, and Lydia became their first Philippian patron.

Strange things began to happen in Philippi. When you read Luke’s descriptions you might expect that Paul would have later had terrible memories of the place, but in the providence of God all things worked together for the progress of the gospel.

A slave girl who was possessed by a spirit of divination followed the missionary team, annoying Paul for days on end. Everywhere Paul went the girl would shout, “These men are slaves of the Most High God, who are proclaiming to you the way of salvation.” Paul was finally so annoyed that he compelled the occupying spirit to leave the slave girl. Her masters were furious because they’d been using the girl to make money as a fortune teller. They started a riot, and the city magistrates got involved.

The girl’s owners accused Paul and his companions of preaching religious views that were illegal in the Roman Empire. Philippi was the leading city of one of the districts of the Roman province Macedonia, and they were very proud of their Roman identity. In fact, the Romans had given them citizenship. Philippi had been involved in various battles between the assassins of Julius Caesar, and later on in the battles between Augustus and Anthony. The slave girl’s owners told the city magistrates, “These men… are proclaiming customs which it is not lawful for us to accept or to observe, being Romans.” (Acts 16: 21)

The magistrates ordered Paul and Silas to be beaten and put in prison.

Paul and Silas spent the evening singing hymns to the risen Lord in prison. Luke

tells us that around midnight an earthquake broke open the doors of the jail and knocked the prisoners’ chains loose. The Philippian jailer, assuming that the prisoners were gone and his life forfeit, drew his own Roman sword to kill himself. Paul called out to him, “Do yourself no harm, for we are all here!” The jailer asked, “What must I do to be saved?” He fell at the feet of Paul and Silas, and they told him to believe on the Lord, Jesus the Messiah.

The Philippian jailer did just that. His entire household was converted. He took the prisoners into his own home, where he fed them and washed their wounds. No doubt he heard instruction well into the night, and then we can deduce that he took them back to the jail.

The city magistrates had decided to send Paul and Silas on their way. They sent a representative to free the men, and then something a little bit humorous happened. You see, the magistrates hadn’t bothered to find out, in all the chaos, whether Paul and Silas were Roman citizens. It was illegal to punish a citizen of Rome without due process of law, and remember, the Philippians took great pride in their status as Romans. Paul told their representative,

They have beaten us in public without trial, men who are Romans, and have thrown us into prison; and now are they sending us away secretly? No indeed! But let them come themselves and bring us out. (Acts 16:37)

Now you know which events to keep in mind as you read Paul’s letter to his friends in Philippi. The book of Philippians was probably written a number of years after these events occurred; Paul was in even worse circumstances when he wrote, “I thank God upon my every remembrance of you, always offering prayer with joy in my every prayer for you all.” (Philippians 1:3-4) I’ll explain more about those difficult circumstances in my next blog.

The previous was adapted by Rachel Motte from a sermon featured on Dr. Sloan’s radio program, A Higher Education, on July 16, 2013.

Read the next blog about joy in affliction.