Parenting Through Scripture: God and His Children 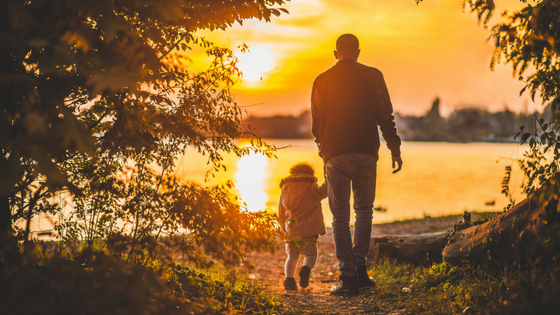 The language of family is used throughout scripture, and we can learn a lot about parenting by looking at the ways in which God interacts with us, his children.

God as Father in Hosea

There’s a very tender passage in Hosea 11 that speaks of God as Father. The prophet Hosea speaks here from God’s point of view. This passage is notoriously difficult to translate, so I’ll paraphrase it here:

When Israel was a youth, I loved him. And out of Egyptian slavery I called my son. The more the prophets called after my people, the more my people went away from the voice of the prophets of the Lord. They sacrificed to foreign idols and gods. They burned incense to idols. Yet it is I, the Lord, their Father, who taught Ephraim—Israel, my son—to walk.

Here you have the image of a loving father teaching his toddler to walk. “It is I who taught Ephraim to walk. I took them, my people, in my arms.” It’s a very touching picture. God the father held his people, Israel, like a father holds his children. Again, I paraphrase Hosea 11:1-4 here:

I took them in my arms, but they did not know that I am the one who redeemed them and healed them. I led them with humane cords. I tried to teach them and instruct them. I was very gentle with them, but at times it appeared that I had to be tough with them. Nonetheless, these cords with which I led them, they were very humane. I led my people with bonds of love. My covenant was a covenant of love. It appeared to be overly restrictive to them, but it was a bond of love.

The last part of this passage also gets translated in dramatically different ways. The New American Standard Bible says,

I led them with cords of a man, with bonds of love,
And I became to them as one who lifts the yoke from their jaws;
And I bent down and fed them. (Hosea 11:4)

The image here is one of the Lord lifting a child to his cheek to hold. It’s also a picture of the Lord lifting the burden off of a weighed down animal, much like what Jesus described when he said, “My yoke is easy, and my burden is light.” Here the Lord lifts a heavy burden off his people. It’s a very touching passage about the Lord, and Israel, and the parent-child relationship.

You have forgotten the exhortation which is addressed to you as sons,

“My son, do not regard lightly the discipline of the Lord,
Nor faint when you are reproved by Him;

For those whom the Lord loves He disciplines,
And He scourges every son whom He receives.”

In this passage the author is telling the people of God to be faithful, and reminding them that, even though they’re being persecuted as Christians, they should not revert to their exclusively Jewish confession. He was probably writing to Jewish Christians who were tempted to escape persecution under the Roman emperor Nero by reverting to their Jewish faith. The author used the analogy of parents and children to remind his readers that their suffering did not mean that God had forsaken them; in fact, because their suffering was happening under the providence and superintendency of God, it would ultimately work out for their good:

It is for discipline that you endure; God deals with you as with sons; for what son is there whom his father does not discipline? But if you are without discipline, of which all have become partakers, then you are illegitimate children and not sons. Furthermore, we had earthly fathers to discipline us, and we respected them; shall we not much rather be subject to the Father of spirits, and live? For they disciplined us for a short time as seemed best to them, but He disciplines us for our good, so that we may share His holiness. All discipline for the moment seems not to be joyful, but sorrowful; yet to those who have been trained by it, afterwards it yields the peaceful fruit of righteousness. (Hebrews 12:7-11)

1: The foundational attribute of God is his holiness, or to put it another way, his faithfulness. Scripture says repeatedly that there is one thing God cannot do: he cannot lie, or be faithless, because he cannot deny himself. God will never fail to keep his promises to his people, and he will never cease to be a loving parent.

2: Keep in mind that as a parent, you are always teaching. Your children are continually watching you, listening to you, and absorbing what you believe about the world, whether you know it or not. We can trust that when we watch, listen, and absorb all that our heavenly Father teaches, everything we learn will be to our benefit. Is that true of your children and you? We can’t be perfect parents, but we can be intentional about using teachable moments just as God does.

I’ll say more about this in my next post, when I’ll give you five practical tips for raising your children according to the principles found in the scriptures we’ve looked at together.